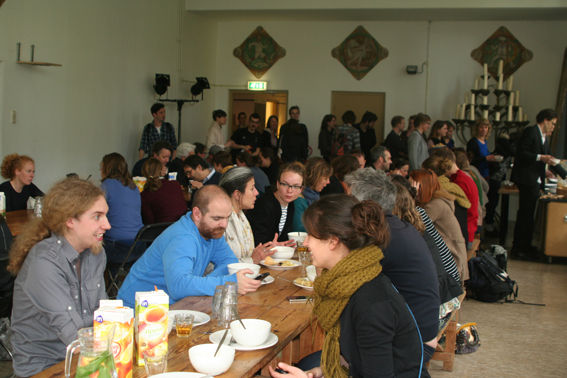 De Theaterschool is increasingly initiating ‘fieldwork investigations’ in order to open up to new artistic developments and to relate more closely to social and political changes. As a result, the meeting SITE, LANDSCAPE, THEATRE was organized on the 27th and 28th of April at DasArts.

The event was a collaboration between Atelier Oerol, DasArts, the Art Practice and Development research group, the Production and Stage Management course, Gwenoële Trapman and Rachel Feuchtwang. SITE, LANDSCAPE, THEATRE was curated by Marijke Hoogenboom and Judith Wendel. Drawn from very different artistic fields and roles within the cultural sector, the meeting brought together a diverse group of international guest artists and speakers.

SITE, LANDSCAPE, THEATRE forms part of de Theaterschool’s research into contemporary artistic practices and creative producing in education, particularly Master’s courses. The school’s ambition is to identify pressing issues and concerns and share them with colleagues working in the field. The hope is that this will challenge everyone to collaborate more closely with each other, and help to bridge the gaps between departments, disciplines, BA’s, MA’s and generations.

Several questions recurred during the meeting: what is at stake out there, in the public sphere? Which practices are claiming the streets, landscapes and the theatres that have always functioned as a space for public life? How does the interaction between theatre, location and communities work?

The meeting was divided into two themes: MAKING PLACES and READING LANDSCAPES. Each theme led to very different contexts within practice. The meeting wasn’t organised in order to present what is already known. On the contrary, it was born out of curiosity and a sense of trust that, although the questions might get even more complicated, the presence of our guests would also enrich, and maybe even help solve, them.

National Theatre of Wales
Matt Ball, Creative Associate of the National Theatre of Wales (NTW), endorsed the fact that creating a community is a very important component of contemporary theatre. Because the NTW doesn’t have its own theatre building, the Internet is the main spot where they build their community. By creating site-specific shows, the NTW tries to create a kind of rootedness. “You can’t put on a show in a random location and expect that it will become a success. Time needs to be invested in linking theatre, locations and communities,” Ball stated.

Koninklijke Vlaamse Schouwburg (Royal Flemish Theatre)
The Royal Flemish Theatre (KVS) is also a pioneer in the search for new connections. The theatre was founded in 1887, and was characterised for over a century by its famous Dutch-language repertoire. The temporary relocation of the theatre from the city centre of Brussels to the problem district of Molenbeek in 1999 created a chance to rethink the mission, and a challenge. “The most logical step was renewal: the replacement of the Dutch-language repertoire with a multilingual programme and the establishment of a new, culturally diverse repertoire,” explained Jan Goossens, the artistic director of the KVS. It’s a development that the theatre has intensified in the renovated city centre theatre, and they are continually learning from their experiences.

It’s inspiring to listen to artists who incorporate a role as a curator in site-specific projects alongside, and as part of, their own practice. Brett Bailey spent three years as the curator of Infecting The City, a public performance festival in Cape Town. Using the festival themes of previous years as examples, Bailey explained how he’d tried to create new performance models within the public space, as a result of which shows became accessible to large groups of minorities in the city.

Markus Ambach
The artist Markus Ambach realised B1/A40 - The Beauty of the Grand Road, a large-scale project around the motorway that cuts straight through the Ruhr area. It was a project that highlighted the existing activities developed by the local communities on (waste) land between, and under, the spaghetti-like tangle formed by the motorway. A zoo, a honey station, a private amateur fish breeder’s, an empty church, a car park where car tuners gather: these were the spots where artists such as Jeanne van Heeswijk and Atelier Van Lieshout stayed during their preparations and, together with the communities, realised their interventions. During the project, Ambach became fascinated by the responses of the local inhabitants who’d become involved with the developments. The artist constantly wondered: “Can we give the residents something which they can appreciate?”

Reading Landscapes
Three ‘readings’ of the landscape also formed part of the conference. Each one was given from the perspective of a different professional practice, expertise or sensitivity. Edwin Becker, Head Curator at the Van Gogh Museum, discussed the Symbolist period and the place of landscape within it. He stressed its possible influence upon the subjects of scenography and location. Renowned photographer Hans van der Meer related how he avoids cliché-laden portraits of the Dutch landscape by using it as a background to simple, frequently humoristic subjects. Finally, the landscape architect Daniel Jauslin explained how the landscape is increasingly being incorporated into buildings.

Lotte van den Berg and Gerardo Naumann
Lotte van den Berg (the Netherlands) and Gerardo Naumann (Argentina) shed light on the practice of artists who chose to work in the public space. Van den Berg stated that the landscape is all embracing and ever present. Her shows erase the dividing lines between play and reality, and let the viewer become a more conscious part of the landscape. Naumann is member of Ciudades Paralelas (Parallel Cities), a nomadic performance festival, through which he enables visitors to discover the spaces and employees of a factory, and the hierarchical structures within it. Naumann is amazed by the political potential of the employees, a potential that they often don’t make use of. He passed the same judgement on art: it’s weak and too disorganised to be able to effect any great changes within society.
With the pronouncement of this harsh fact, Naumann brought the meeting to a rather grim conclusion. The inspiring stories shared by the other participants offered, in their own unique ways, enough positive ripostes over the course of the two days to convince of the binding, but complex, character of art in the public space. 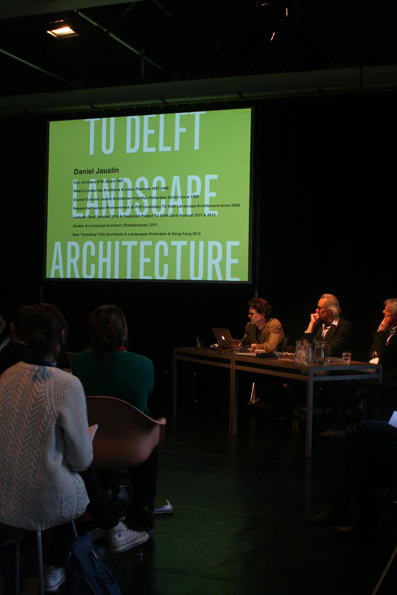