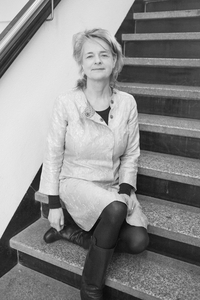 interim director Academy of Theatre and Dance since February 2020

Marjo van Schaik has been appointed interim director of the Academy of Theatre and Dance as of February 2020. She will assume this role until a new director is appointed.

Marjo van Schaik is a creative producer, strategic adviser and researcher. She devises and initiates projects, such as Europe by People. In addition, she is interim director of the cultural centre Tolhuistuin in Amsterdam. Marjo also conducts academic research in the cultural sector. In 2018, she obtained her PhD with a thesis entitled ‘Spaces of culture: A trialectic analysis of the recent developments of cultural venues in Amsterdam’ and her book ‘Spaces of Culture. New cultural venues in Amsterdam. Research and strategies’ was published in the same year by nai010 publishers. She regularly gives lectures within this context both in the Netherlands and abroad.