'Why didn't you stay for me?' and ‘A Fire-Scape’ win AHK Graduation Prize 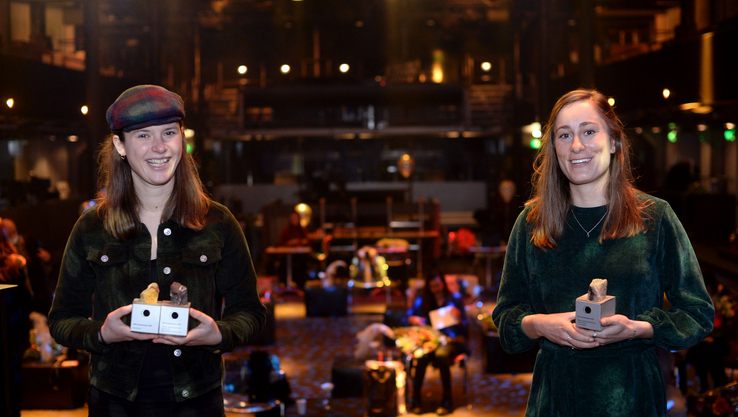 The award ceremony of the AHK Graduation Prize was not as exuberant as usual this year. On 21 January, the prizes for the graduation project of the class of 2020 were presented in the Melkweg with just a few people present. Bert Verveld (chairman of the Executive Board) was happy that the presentation could go ahead, even if it was via livestream, in spite of everything: ‘In any event, it is a boost for all students: your work matters, also in times of coronavirus.’ The prize in the Bachelor’s category and the audience award were won by Milou Gevers (Directing Documentaries) for her film ‘Waarom bleef je niet voor mij?’ (Why didn’t you stay for me?) The prize in the Master’s category was presented to Hanna Prinssen (Master in Landscape Architecture) for her design A Fire-Scape.

Winning Bachelor’s project Waarom bleef je niet voor mij?
Milou Gevers graduated from the The Netherlands Film Academy with her documentary Waarom bleef je niet voor mij? From the jury report: ‘Milou Gevers has made a moving film in which she approaches a difficult and heavy topic in a beautiful, sober way. The combination of documentary with animation is never forced and the way in which the children are allowed to speak is a testament to a great level of care on the part of the documentary maker. In this way, an organic film arises that presents a taboo, which is still prevalent, with great integrity. In one word: beautiful.’ Milou also won the audience award (a mini-beamer) with one third of the 1,900 votes.

Winning Master’s project ‘A Fire-Scape’
Hanna Prinssen graduated from the Academy of Architecture with her design A Fire-Scape. From the jury report: ‘A Fire-Scape touches on the way in which we, as humans, must deal with climate change. All the ingredients for a convincing Master’s project come together.  A complex issue is researched in an impressive manner, the relevance is abundantly clear and it is a total success aesthetically. Hanna Prinssen sheds new light on a problem that will increasingly require a solution in the coming years.

Criteria and jury
The Graduation Prize of the Amsterdam University of the Arts consists of a cash prize of €3,000 in the Bachelor’s and Master’s categories and an audience award. Five Bachelor’s projects and five Master’s projects from the graduating class of 2020 from different academies were nominated. The jury assessed all entries on the basis of three criteria: the quality of the work, the way in which the graduates made a connection with the outside world and the relevance of their work for the development of the field.

We hope to be able to welcome everyone live again at the next edition!

The recordings of the event can be seen here.