The winner of the ‘Swimming to Manhattan’ competition is the project Red Point Park. The award ceremony in the Arcam gallery marked the finish of the winter term that the Academy organises each year. The concept for this project for the Upper Bay in New York breaks with the tradition of ‘form follows finance’ and emphasises clear and dynamic water instead of the economic development of the waterfront.

Swimming to Manhattan is a competition for third-year students at the Academy of Architecture. For two intensive weeks, interdisciplinary teams of students worked on intelligent and imaginative proposals for the Upper Bay in New York.

According to the jury the twelve entries reveal a wide range of future scenarios for the Upper Bay. The plans can be divided into three categories: programmatic proposals for the new water park in New York; hydraulic engineering proposals that focus on protection against water; and dynamic proposals in which water is deployed as a catalyst for new developments. 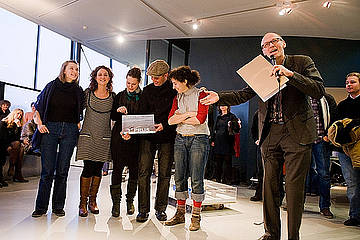 The winning project Red Point Park also opts for a new development that focuses on water. From the jury report: ‘The project shows a new way to make waterfront developments. It features new relaxation zones (Red Point Parks) between the city and the water that incorporate the dynamism of the delta. Different natural banks that can admit all sorts of new developments emerge within this zone.’

Twelve teams of students took part in the competition, assisted by six consultants that the students could consult during the project. The jury consisted of Aart Oxenaar, Machiel Spaan, Marieke Timmermans, and Cees van der Veeker (Lola Landscape Architects).

Exhibition in Arcam
The projects are on show at the Arcam gallery, Prins Hendrikkade 600 in Amsterdam, until 19 February. For Arcam, the exhibition forms the prelude to the project Glimpses, to be held this summer in conjunction with the New York architecture centre.