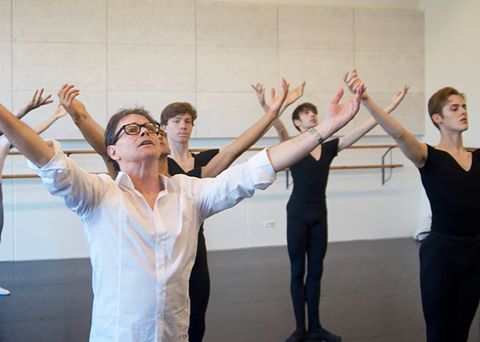 Hamburg Ballett’s ballet master Kevin Haigen paid a visit to the Dutch National Ballet Academy from 29 September to 3 October. He was here to cast students for John Neumeier’s much-acclaimed Yondering, which will be the spectacular closing section of the 2016 Dansers van Morgen (Dancers of Tomorrow), the Dutch National Ballet Academy’s  annual end-of-year show.
Yondering has a particular emotional significance for artistic director Jean-Yves Esquerre, so he is overjoyed that Neumeier gave his permission for the school to perform this very important work.

When Jean-Yves Esquerre was a dancer at the Hamburg Ballett, he attended rehearsals with Neumeier and pupils of the Hamburg Ballet School. ‘With hindsight, that was where I sowed the seeds for what I do now’, says Jean-Yves Esquerre. ‘I was really touched by the way John worked with the children. He was so friendly and only worked with so much care and attention for each individual pupil. As a School Director I often think of him.’ Years later, Yondering, which was originally created in 1996 for Canada’s National Ballet School, was danced for the very first time by students at Neumeiers ‘own’ school.

Yondering is a playful exploration of youthful innocence and adventure set to the music and lyrics of the nineteenth-century American songwriter Stephen Foster. The subject matter makes it a wonderfully fitting work for students on the brink of stepping out into the big wide world and embarking on a professional career. Jean-Yves Esquerre previously co-staged this ballet at San Francisco Ballet School. The Dutch National Ballet Academy is now the seventh top-level classical ballet school to be given permission to perform Neumeier’s choreography.