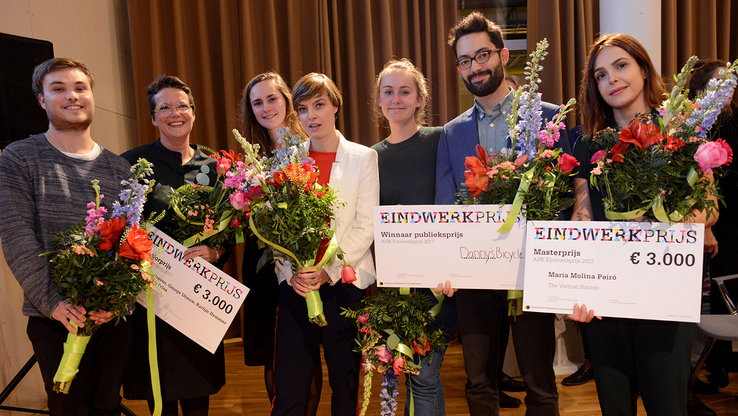 The Graduation Prize of the Amsterdam University of the Arts consists of a cash prize of €3,000 in the Bachelor’s and Master’s categories and an audience award, which consisted of a helicopter ride this year. Five Bachelor’s projects and five Master’s projects of 2017 graduates from various academies were nominated. The jury was very impressed by the quality of the entries. Without exception, the projects displayed a great desire for innovation, an open view of the future and above all a good command of the discipline. An important criteria upon which the jury evaluated the entries, in addition to them having been assessed as good, was the way in which the graduates made a connection with the outside world and the relevance of their work for the development of the field of study.

Winning Bachelor’s project De Louteringsberg (Purgatory)
With de Louteringsberg (Purgatory) Marijn Graven, George Dhauw, Maartje Prins and Marlijn Hemmer, alumni of the Academy of Theatre and Dance, created a theatrical performance about a challenging theme: (self-chosen) death. The audience was invited in the performance to go on a journey together with the creators, in which you were asked to face up to your own death.

From the jury report: ‘A performance that was very successful aesthetically, was the finished article in every respect and exuded a consistently high quality. The creators managed to make the audience part of the performance in an ingenious way, as a result of which a deeply layered quality arose. Due to the unique form, the strong choice of live music and the topical theme, de Louteringsberg was a performance that made a lasting impression.’

The jury praised Maria for the layered quality of her research project and called it clever, creative and above all extremely beautiful. From the jury report: ‘In our society that is completely dominated by the media, María Molino Peiró makes a heartfelt plea for the power of forgetting. Using new technologies, social media, cinematic storytelling and personal experience, she convincingly demonstrates why forgetting is not necessarily a negative thing.  The Vertical Horizon is a philosophically powerful and layered research project that perfectly reflects the moral questions that our Digital Age raises.'

Audience award
This year, the audience award went to Nelson Ogliastri (Master Composing for Film) for his project Danny's Bicycle. Ogliastri received 21% of the total of 1,750 votes. The prize consists of a helicopter ride above Amsterdam.

Award ceremony
The festive presentation of the Graduation Prize took place in the Atrium of the Breitner Academy on 27 November. This year, the jury consisted of chairperson Xandra Schutte (editor-in-chief De Groene Amsterdammer), Dominique Vleeshouwers (co-founder & director Combined Creatives and winner of the Graduation Prize in 2013), Aaltje van Zweden (founder and board member of the Papageno Foundation) and Edwin van Huis (director Naturalis, also member of AHK Supervisory Board).

For more information on the winning and nominated projects, visit ahk.nl/eindwerkprijs. 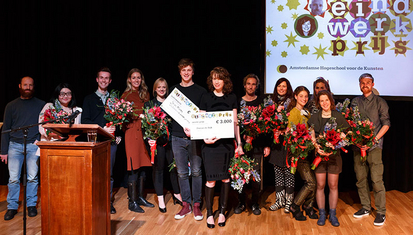