insiration image: from the film 'Weekend' by Jean-Luc Godard

From June 25 to June 30, our new generation of talent will present themselves during the be-CONNECTED. Are you curious about the creative outbursts of our students online? Read the interview graduating Director Zephyr Brüggen (Theatre Directing) about Lizzy & the Bacchants and you will already get a taste. Visit the online be-CONNECTED festival and create an account!

A sex strike and an obsessed group of god-worshippers. In Lizzy & the Bacchants, director Zephyr Brüggen (26) forges two classic texts about revolutions together into a three-hour-long, merciless intoxication. ‘I asked myself: how do revolutions work? How do large groups of people get into motion?’

Zephyr, what does the audience experience in Lizzy & the Bacchants?
‘A three-hour party! You start in an empty space. During the performance we build up the theatre, and as a spectator you are sucked into a stupor. We share food and drink with our live audience, which spins around the room in a dance of chairs. I wanted to make something that feels more like a football match or a night in a sweaty club than a classic theatre evening. With eight top actors and a DJ, we mercilessly speed things up. The intoxication seems cosy at first, but becomes more and more vicious. Until nothing remains but the tragedy, the disillusionment, the awakening from the intoxication of theatre …’

Who is the Lizzy from your title?
‘Lizzy is modelled on Lysistrata, the protagonist of the ancient Greek comedy Lysistrata. In that comedy, the women of Athens organise a sex strike so that their husbands will stop waging war. Lysistrata is an idealist. Her revolution is a constructive one, full of hope. But the revolution fails: it ends with the women having to go back to their kitchen sink and the men partying.’

And who are the Bacchants?
'The Greek tragedy The Bacchants is also about a revolution. Dionysos, the god of drunkenness and theatre, comes to town and gets all the women drunk. Dionysos' revolution is a vengeful, destructive one, which ends in murder and horror. But his revolution succeeds.'

Two revolutions with opposite results
‘That's right. I put these two classic pieces back to back to see: what is the power of a group? And what is the role of the individual in it? My performance reflects on revolutions and change. If we humans, as one huge moloch, get moving, I think we can bring about great positive changes in the world. But how do you do that? How do you get into motion together? It can be wonderful, but also dangerous, to lose yourself as an individual in a larger whole. After all, moving masses was - and is - the dream of many dangerous world leaders.’

Do you dare to lose yourself in a larger whole, a mass?
‘I love moments of identity loss. Moments in which you can leave your own person behind and become part of a greater whole or a greater ideal. At the same time, I am afraid of that: what if I do something I don't agree with? I have always found it difficult to identify, describe or know myself. "I" only exists in relation to others. In the performance, I give form to this lack of identity, this integration into the group, in a sensory way, and link it to political questions.’

What was your biggest challenge in creating this performance?
‘My love for maximalism and minimalism at the same time. I always start with a lot. Very much. The rehearsal process is my funnel, in which I try to make everything as precise, essential and naughty as possible. Rehearsing this enormous performance in six weeks was actually madness.’

Why madness?
‘We had gaga dance workshops, practised acrobatics and sang Renaissance music. And we also analysed two huge classical texts and made them our own. But I am glad we did it.’

If we make your funnel very narrow, what is the core idea?
‘At school, we learn to formulate a core idea for each performance. I stole mine from Ru Paul, who once spoke the wise words: We're all born naked. The rest is drag. You could also say: The rest is theatre. And I think Euripides would add: But drag can make you rip your own child to pieces.’

Finally: what is it like to make a performance as a theatre director in these times?
‘We are only allowed to play the performance for eight people, only the graduation committee. Of course, I hope that later in the year we will be able to perform for a much larger audience. Because this performance is crying out for a huge mass of dancing spectators!’ 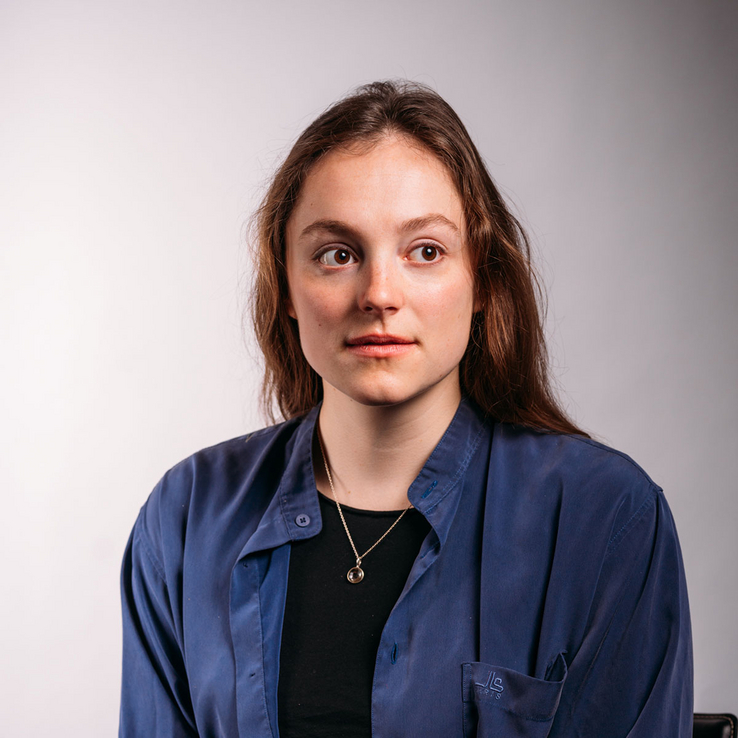