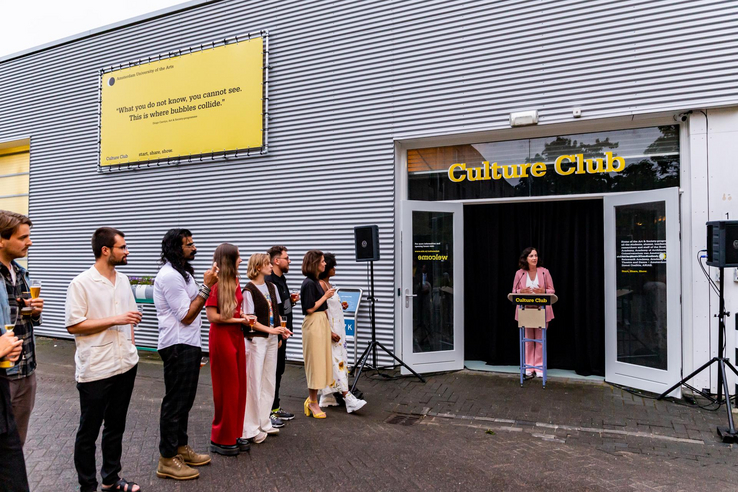 After months of preparation, the time had finally come on June 25: the AHK Culture Club is officially open! In the presence of mayor Halsema, the new location of the Amsterdam School of the Arts immediately lived up to its motto 'start, share, show' and presented itself as a hotspot where art forms come together and new ideas arise.

When the evening starts on a rainy Marineterrein, a small group of invitees get the chance to take a look at the Culture Club before the official opening. Although via the back entrance, because the main entrance will be used by the mayor later. At the donut stage - a reference to Doughnut Economics and an important part of the Culture Club's identity – vice president of the Executive Board of the AHK Annet Lekkerkerker welcomes everyone for the first time . “We are delighted to be able to add the Culture Club to our Marineterrein locations,” she says. ‘All locations have in common that students, alumni and lecturers of the AHK are welcome. But with the Culture Club we look beyond art. Here we want to commit ourselves to the city and take the space to question the status quo .'

Collaborate and exchange ideas
As co-founder, Matthijs ten Berge has been involved with the Culture Club from the start. At the donut stage, he reminisces about nine months ago, when the location was still an empty warehouse. “But after today, this is the place where everyone can come to exchange ideas and enter into interdisciplinary collaborations,” he says. ‘In addition, the Culture Club has already been home to the Art & Society programme for the past six months, where alumni of the AHK have the opportunity to work on the start of their after-school life and career.'

Art & Society Program
After these words, the light is dimmed and those present can see and hear what the alumni have been working on over the past six months. In a choreographed presentation, dance, architecture, music, spoken word, technology and VR pass by. The common denominator is an interdisciplinary approach and a socially involved approach. It is clear: from the Culture Club the view is directed outwards.

New beating heart of the AHK
Mayor Halsema has now arrived and has taken up her position in front of the main entrance next to Bert Verveld, chairman of the Executive Board of the AHK. He is the first to speak and is happy with the 'new beating heart of the AHK on the Marineterrein'. ‘As the AHK, we want to establish a connection with the city,’ says Verveld. “The makers and artists of our academies have a major role in this.” He points to the Pillars of Hope, the newly arisen work of art opposite the Culture Club. “This work revolves around reflection and dialogue and that is exactly what we want to do here.”

Art is the breath of the city
Mayor Halsema agrees with those words. 'Art in this city is so much more than beauty or inspiration. It is the breath of the city and provides comfort in difficult times. And we've had hard times. Artists have not had a chance to show their work in the past year. It is very important that young makers get the chance to do that. I hope that the Culture Club will become a place where the art community can flourish in all its diversity.' Halsema unveils the main entrance on a now dry Marineterrein. Accompanied by the erupting music, she steps in as the first visitor to an officially opened Culture Club. In her wake, the space is slowly filling up for the first, but certainly not the last.

Recruitment for Team 2 has started
New candidates can apply for the period October 2021 to June 2022. The Culture Club is looking for alumni, with a maximum of 3 years of practical experience, who are highly motivated to develop work with a social component based on the strength and knowledge of their own discipline. More information is available on the website.