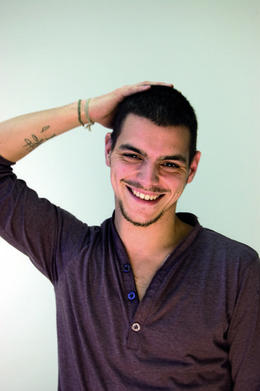 Joeri Dubbe, former student of the Nationale Balletacademie, has won the BNG Nieuwe Theatermakers Prijs 2012 with his production Chrono. The special jury chose Joeri Dubbe from five nominated theatre makers, all featured during the past season in the series Blind Date – new theatre makers on tour.

In the eyes of the jury, the winning production coupled a perfect performance to dansante theatricality. “The light seemed to dance in step with the performance and was decisive for the choreography. The clear-cut, flawless performance and the way all components interacted made this an unforgettable theatre experience.”

On completing the  Nationale Balletacademie (1993-2002) Joeri Dubbe began his dance career with the Nationale Ballet. After four years he made the transition to the Nederlands Dans Theater II. In 2008 he took the plunge and began as freelance dancer and choreographer. Under the auspices of Korzo productions, he made a number of short pieces that were staged at DansClick, Holland Dance Festival, 'Here we live and now' and the South African festival BIG5. In 2011 he was awarded the Prijs van de Nederlandse Dansdagen Maastricht.

The largest Dutch prize for new theatre makers is endowed with a sum of 45.000 euro. The Theater Instituut Nederland, as organizing body, puts up this money for the creation of a new production.
The jury described Dubbe’s production as 'an unforgettable theatre experience'.