‘The theatre world isn’t just loose grains of sand, it’s a beach where something very special can happen’ 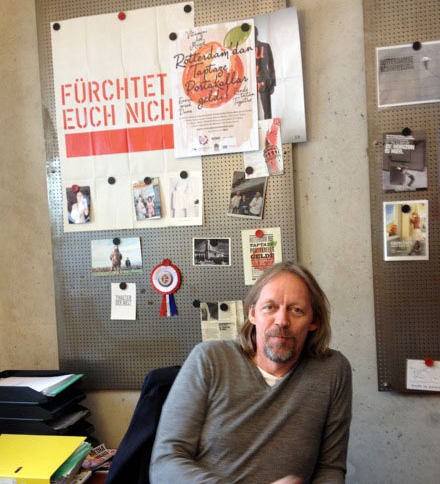 The new director of de Theaterschool Jan Zoet (54) talks of his first meeting with the theatre avant-garde during the 1970s and of exhilarating times at the Mickery Theater. A meeting in the Rotterdamse Schouwburg.‘I’m a born optimist.'

The new director of de Theaterschool Jan Zoet (54) talks of his first meeting with the theatre avant-garde during the 1970s and of exhilarating times at the Mickery Theater. A meeting in the Rotterdamse Schouwburg.‘I’m a born optimist.’

Covered by a thick layer of snow, the Schouwburgplein stretches out like an enormous white carpet before the Rotterdamse Schouwburg. Across this wintery square, a path has been cleared so you can walk to the Schouwburg without slipping up. On entering the theatre foyer, your eye immediately falls on a colossal media wall built up of video screens. Trendy video clips announce a variety of activities while another screen gives twitter updates. Apart from the continuous bleeps emitted by his i-Phone and computer, Jan Zoet’s office on the fifth floor feels a lot less high tech than the foyer below. Large notice boards are crammed with flyers, photos and posters of productions; cactuses fill the window sill and an old wooden conference table is stacked with mounds of paper. Instead of finding yourself inside the concrete edifice built by the renowned Dutch architect Wim Quist – referred to popularly as the ‘kist van Quist’ (Quist’s bunker), you feel you’re in a pub.

‘There’s a snowball fight with the theatre’s communication department scheduled for one o’clock,’ says Jan Zoet. Together we descend the steps to the Schouwburgplein and pelt each other with snow balls like a bunch of kids. Naturally the prime target is: Jan. ‘Let him have it,’ staff members taunt, ‘he’s leaving anyway!’

DIY shop
Fifteen minutes later with frozen fingers we sit at the wooden table in Jan’s office. We talk about his youth in the village of Oude Wetering and his secondary school years. Jan relates how after he finished school he had ambitions of enrolling at de Theaterschool but his parents disapproved.

‘It has to do with the small village I hail from. My parents ran a building contractor’s firm and a DIY store where I also worked. At grammar school I was a member of the school dramatic society and a Dutch teacher told me, ‘you should carry on with that.’ But my parents thought that theatre was not for me and in those days you didn’t contradict your elders or disregard their advice. I was a shy boy who hadn’t seen much of the world. I went to Leiden to study Dutch literature and took Theatre Science as a minor. I thought: that way I’ll end up in the theatre anyway. I had really set my heart on it, it wasn’t just a passing whim. That’s advice I’d give to anyone considering a theatre study. You need inner motivation, much more than you need talent.

Door closers
During his study in Leiden, Jan Zoet was a habitué of the LAK-Theater, the arts and culture centre connected with Leiden University. In the 1970s this university theatre was situated on the top floor of a warehouse. It was at this venue that Jan became acquainted with the earliest phase of the entire European avant-garde theatre. Laurie Anderson was a regular performer and Jan Fabre resided there as young artist when still completely unknown. As a student Jan went to see many productions, including the opera Einstein on the Beach in Rotterdam, but also productions and ensembles abroad. He regularly visited Ritsaert ten Cate’s Mickery Theater that, at the time, was located in the Rozentheater in Amsterdam. Jan’s ambition was  to further develop himself there after completing his study.

‘Mickery didn’t stage conventional text-based theatre. It was a leading international centre for avant-garde theatre and performance art. I had an interview with Ritsaert and he asked me: ‘What can you do?’I replied: ‘I’m a bit of a handyman,’ and my first job was to replace all the door closers in the Rozengrachttheater. My second task was to build a kitchen and my third ,  assignment was to summarize, translate and analyze a book. Subsequently I was assistant to the director, chief of production and dramaturge of a production before they finally hired me. The theatre métier I’ve learnt to cherish is what I experienced at Mickery. I began to value the role I had: connecting the maker with the technician and the actor with the director. As dramaturge, I helped the director adapt a journalistic or essay-like text to function as basis for a production. I learned to switch between all layers and facets of a production, whether TV tube formats, the poetry of a text or the qualities of an actor.

Exceptional world
As new director of de Theaterschool, Jan Zoet thinks it’s important that the study programmes see themselves as part of a greater entity. He’s convinced that to achieve something together, wide support is required. He wants to take people on board to think about and develop a vision.

‘I see dialogue as a force and movement as a solution. I think that within de Theaterschool dialogue has already begun, although not as literally or constructively as one would wish. Everyone is conscious of a greater entity and there is mutual contact both mentally and physically. You could say that the theatre world outside school also consists of islands: dance, theatre, music theatre. But if you regard the theatre scene from the perspective of society, you see a small, specialized field that has a lot in common, more than with the surrounding world. Everyone is busy telling stories based on artistry in an environment where artists and public agree to come together. Looking at it from the outside world, these are not just loose grains of sand but a beach where something very special can happen.
I want to continue to stimulate the dialogue within de Theaterschool. I hope that the foyer will increasingly become an open space where daily encounters, debates and readings will be programmed. It should appeal to everyone, even people from outside school. It’s one of the things I’ve learnt here in Rotterdam. If you invest in an open space and nurture it, it becomes a sort of living room.’

Born optimist
In his new function, Jan is looking forward to observing many young artists at work. He wants to follow the work and development of the students. He has always drawn sustenance  from attending performances – also in Rotterdam.

‘I really need to see evening productions otherwise I can’t do my work. A theatre production shouldn’t leave you unmoved, it’s more than just escapism or the endorsement of your own views. When a theatre artist makes a production, he or she must feel the need to change something or spotlight a certain issue. This can happen in all sorts of ways: intuitively, vulnerably, poetically, using an unsettling documentary approach or on a political level. But the expressiveness of dance’s beauty and virtuosity can also touch people, offering them hope or comfort. As a society, we need just a glimpse of perfection to help us keep going for a few decennia. Being an optimist, I’m convinced that art contributes to this.’ 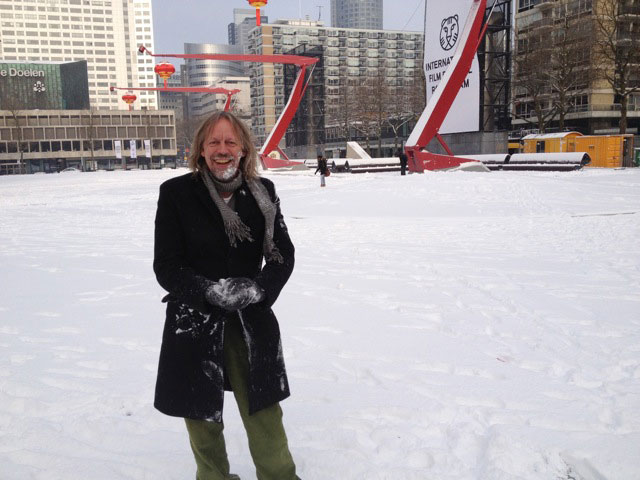 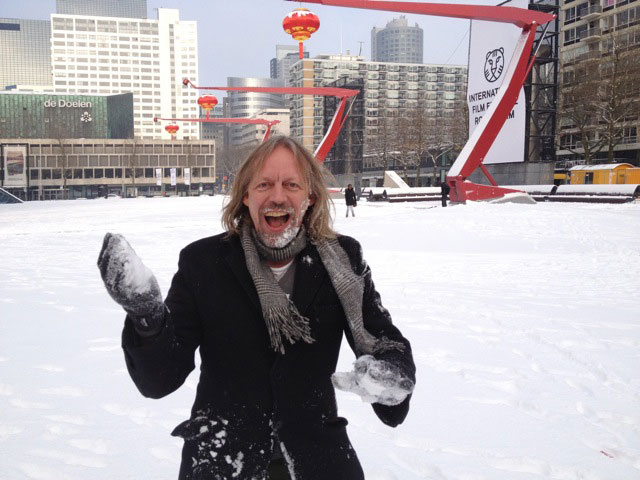 Share
Amsterdam University of the Arts>News and events>News>‘The theatre world isn’t just loose grains of sand, it’s a beach where something very special can happen’