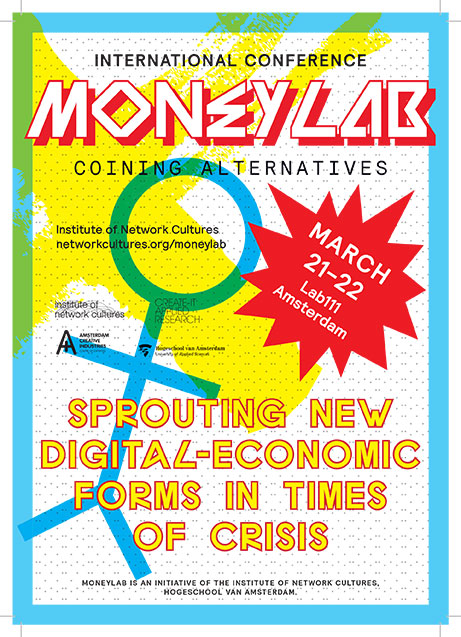 MoneyLab: Coining Alternatives is a two-day international conference on alternative economic forms, currencies and banking systems organized by the Institute of Network Cultures on 21-22 March 2014 at Lab 111 (Arie Biemondstraat 111) in Amsterdam.

What is the future of internet-based currencies like Bitcoin? Can revenue models such as crowdfunding function as structural sources of income? What lessons are to be learned from mobile money payment systems in Africa? Is it possible to imagine a future sustainable network-economy? How should we understand the politics and governance of alternative digital-economic forms?

The MoneyLab Alternatives Bazaar complements the conference. The Bazaar presents organizations and initiatives directly involved with alternative revenue models and local currencies such as Qoin, Noppes, Next Nature & Eco Currency, Timebank CC, Peerby, and a Bitcoin ATM. The Alternatives Bazaar provides a platform to network, exchange ideas, and get involved and is open throughout the 22nd of March. Further activities at the event include art performances and workshops.