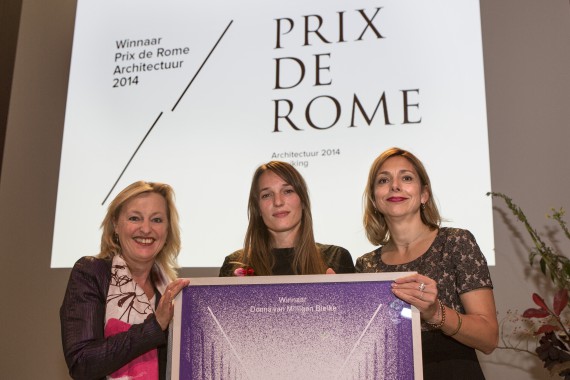 Donna van Milligen Bielke (1983) won the prestigious prize with Cabinet of Curiosities, her design plan for the Hoogstraat in Rotterdam. The international jury, chaired by Birgit Donker, awarded the prize to Van Milligen Bielke ‘for the radical and poetic intervention with which she proposes to frame architectural icons in the Laurenskwartier district. Various iconic buildings have been placed in individual containers, which results in exciting new public interspaces. By placing each piece of history in a different container, the banal and the serene in this radical plan come together effortlessly, while the large void of the Binnenrotte street is noiselessly ritualised.’

The Prix de Rome consists of a cash prize of €40,000 and a work period in Rome. Van Milligen Bielke was nominated together with seven other people, including Steven Delva, alumnus of the Landscape Architecture study programme at The Amsterdam Academy of Architecture. The Prix de Rome was previously won by alumnus Ronald Rietveld in 2006.

About the Prix de Rome
The Prix de Rome is the oldest and largest prize in the Netherlands for architects and visual artists under 40. The prize has been organised and financed by the Mondriaan Fund since 2013. The submissions of all nominees this will be on display until 4 January 2015 at Het Nieuwe Instituut and in a publication, the first copy of which will be presented during the award ceremony.