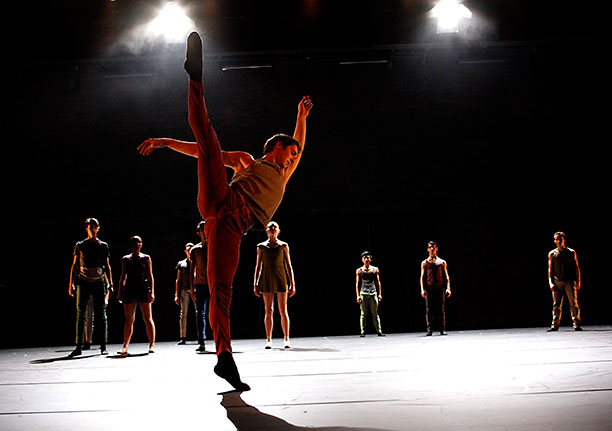 As a last minute announcement Joseph Massarelli was offered a contract by Dutch National Ballet’s Junior Company just after performing in the final Dansers van Morgen (Dancers of Tomorrow) end-of-year show. This American dancer, who has been studying in Amsterdam since 2013, performed so wonderfully in pieces such as Maurice Béjarts Seven Greek Dances, that the Junior Company’s artistic coordinator Ernst Meisner made him this unexpected offer. Joseph has now been with the ensemble for two months, as have the NBA students Belle Beasley, Theo Duff-Grant and Antonio Martinez.

‘All of a sudden my parents were on stage too, and I thought, “What on earth are they doing here?”’ explains Joseph (Joey) Massarelli, his voice still betraying his amazement about what happened on 28 June. ‘Jean-Yves Esquerre was encouraging before the show. He said, “If you don’t get a contract this year, you definitely will next year.” Afterwards he spoke to all the dancers. I could see that he was excited and that something was going on, and then Ernst Meisner just stepped up and made the announcement. I know it sounds really clichéd, but it really was the best moment of my life.’

Nineteen-year-old Massarelli had always thought that being just 1.75m tall would be an obstacle to getting a contract from the Junior Company – or any other European classical ballet company, for that matter. ‘A metre eighty is the minimum for the Dutch National Ballet,’ he explains. And on top of that he wasn’t entirely convinced by his own marvellous performance in Dansers van Morgen. ‘Everyone was there at the shows, including Ted Brandsen (the artistic director of the Dutch National Ballet), Rachel Beaujean (head of the artistic staff), choreographer Hans van Manen, and Ernst Meisner. But I had no idea whether they’d think I was good enough.’

Massarelli was a late starter. He studied jazz and tap as a child, and his first ballet lessons only came at the age of thirteen at the Chicago Academy for the Arts, where, on the advice of his dance teacher, he did an audition. ‘I wasn’t interested in ballet. Boring!’ But it got more fun when he discovered that he could amaze people with his leaps and turns. ‘It was only when I was 15 or 16 that I started to get a feel for the artistic side. I was loving watching videos of the American Ballet Theatre and The Royal Ballet, and  by chance I stumbled upon a promotional video for Giselle by the Dutch National Ballet. I’d never heard of the group before, but I was really affected by what I saw. The dancers had something really special; something I’d never seen before.’

Soon afterwards, Ernst Meisner scouted Massarelli at the Youth America Grand Prix, the leading ballet competition in the US.  Meisner offered him a grant to attend the Amsterdam International Summer School. ‘I didn’t even realise straight away that it was a course from the school affiliated with the Dutch National Ballet, but when the penny dropped my bags were soon packed.’

He was allowed to stay on after the summer school. “I’ve learned such an incredible amount of the past year. Jean-Yves has continually pushed and challenged me, in both technical and artistic ways. Sometimes it just got too intense and I thought, “I’ve had it with this.” But in the end it’s been so worthwhile. Now I’ve got a contract I never thought I had a chance of getting.’

Like his fellow first-year students at the NBA Belle Beasley, Theo Duff-Grant and Antonio Martinez, Massarelli is now a member of the Junior Company. All four of them are hoping to graduate this year from the Dutch National Ballet Academy. Massarelli has already got himself two solo roles. ‘The Junior Company is touring Narnia around the Netherlands at the moment, and as well as ensemble roles, I play the part of Mr Tumnus and the Lamppost. We are also already rehearsing choreographies by Ernst Meisner, Eric Gauthier and David Dawson for the next programme.’

One of the ballet masters with whom he frequently works, is Caroline Sayo Iura, a former Dutch National Ballet’s principal dancer. ‘She’s a real inspiration to me, partly because she’s not that tall. She’s got a powerful way of showing how you can distinguish yourself, how you can work yourself up to being a principal dancer – even if you don’t completely fit the standard physical picture.’

In addition to the four first-year students under contract with the Junior Company, two graduation-year students will be working with German ballet companies this year. They are Nina Dijkman with Theater Augsburg’s ballet company and Brandon Demmers with the junior ensemble Bayerisches Staatsballett II in Munich. 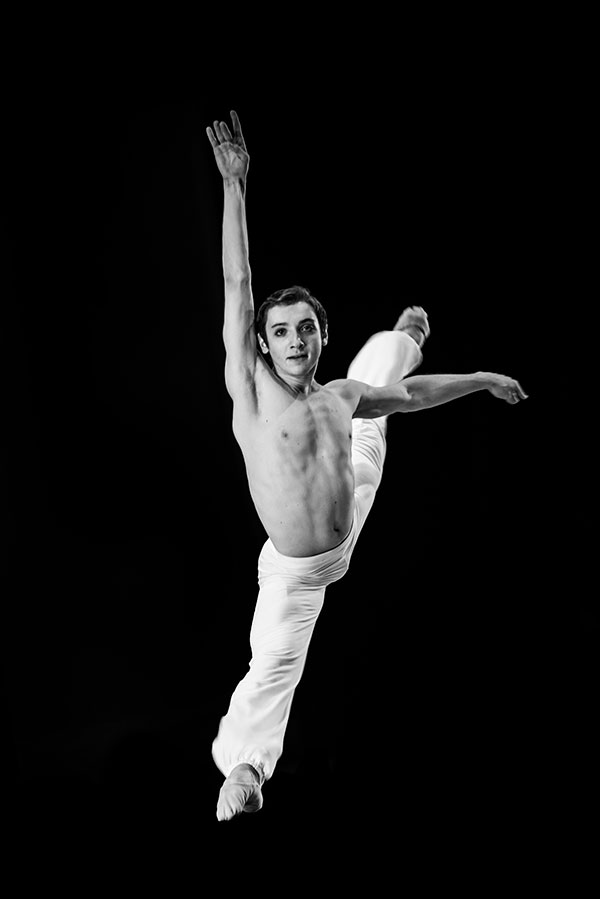