Intense dynamics at the Graduate School 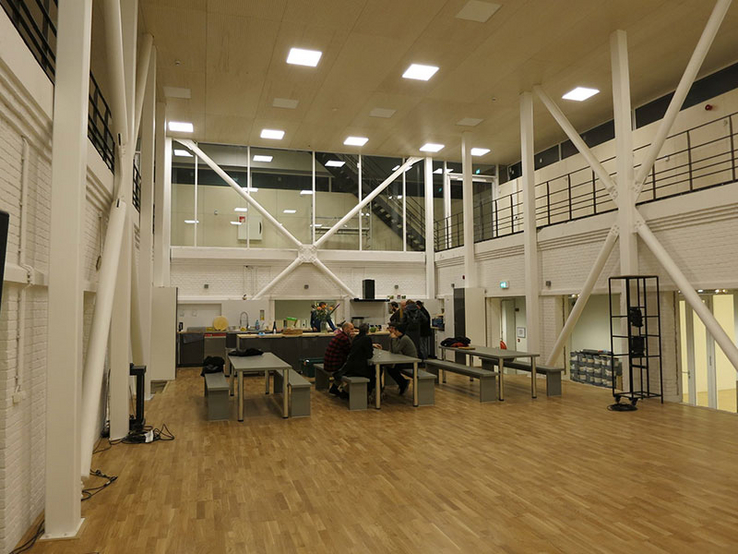 There’s a building site in front of the entrance and a pile of boxes in the corner of the office. It’s still work in progress, but the Graduate School on the IJ in North Amsterdam is a reality.

The two master’s programmes and de Theaterschool’s research group have joined forces, and from now on they will be sharing a ‘home’ – with the studios, library and kitchen, and also the offices with a view of the IJ waterfront and the EYE film museum. We talk to the artistic directors, Jeroen Fabius (Amsterdam Master of Choreography) and Barbara Van Lindt (DasArts – Master of Theatre), and Marijke Hoogenboom (Performing Arts in Transition) – in their shared office.

Three steel desks stand in this otherwise a virtually empty room – a cabinet is propped against the wall. ‘Getting our own office set up hasn’t been the priority,’ says Fabius. ‘It’s been a time of intense dynamics. We already knew in the run-up to this new arrangement that there were going to be some questions we’d only be able to answer on the go, as we went along. That’s the stage we’re at now.’ New systems have to be developed; it’s only in the last 24 hours that Barbara, Jeroen and Marijke have been able to access each other’s digital calendar. The main issues in the kitchen, where people will be cooking for each other and eating together, are practical ones: who is going to cook, who is going to wash the dishes, and who is going to scrub the pans? It’s all about sharing the work, just like at home.

Fabius: ‘In some respects, we’re struggling to keep up, but in other respects were racing ahead.’ Although de Theatreschool’s secondary phase master’s programme has only just crossed the IJ to settle on the other side, Fabius, Van Lindt and Hogenboom are already working to fulfil a longstanding ambition to extend the programme by developing a tertiary programme entitled ‘Third!’. A PhD in an artistic discipline might not be anything new in the UK, Australia or the US, but it is in the Netherlands. Fabius: ‘On 21 May we’re holding a symposium. Because we don’t have accreditation for a third phase yet, initially we want to guide six or seven people into a doctoral place at the university, and then supervise them there on the basis of our expertise in theatre and dance. We’ve invited applications within a limited circle, and 15 people have already expressed an interest.’ Various lecturers and alumni have also put themselves forward for the newly-created Local School, a research group focusing on the value of the city and the community in the performing arts.

Back to the bare office and the brand new ‘home’. Van Lindt: ‘We’ve got a fantastic place here. It’s exciting how the students are showing us what can be done with the new building. The studio next door to here was transformed into a white box, another into a dark labyrinth, a third into world of wood and stone. The technical set-up in all the studios has been kept low-profile so they can be used freely and flexibly and be transformed to the fullest extent. In the design of the building, the walls and ceilings have deliberately been left unfinished. That also gives a feeling of space, and welcomes experiment.’ The spectacular half-glass auditorium on the roof has only been finished for a week. Van Lindt: ‘My students, who are used to smaller performances spaces, can’t wait to challenge their work with the size of this auditorium. I’m extremely happy with it.’

Of course, in getting to know the new building, some snags are also coming to light. None of the spaces are soundproof, for example, and music from one studio can always be heard in another, so whatever you do, you have to take other people into consideration. Hogenboom: ‘When you team up like this, it’s important to share your experiences. It isn’t possible to live separate lives here. This is why we’ve set up a Daily Life meeting, a monthly meeting for occupants, which everyone is expected to attend: students, technicians, the building managers and the secretarial staff. We get together in the heart of the building.’ The heart of the building is the kitchen – all the studios and offices open onto it. Hogenboom: ‘It’s vital for us to have the kitchen as a communal space. For us to meet here and have lunch together, outside of all the meetings and lessons. This informal exchange always puts relationships in a very different light, and that’s extremely valuable.

Van Lindt: ‘The official opening of the building is not until 22 April. Then we’re having an open day. Meanwhile, we’ve already had a lot of visitors, at public presentations, a party, a meeting. Most of them are impressed by the space, but also amazed that we’ve given up our individual workplaces. For me that already feels completely natural. How come? I’ve no idea. I think because we really want to make something of this together. We enjoy making our guests feel part of this new story.

Save the date:
Opening of the building on 22 April
Symposium Creative Producing / New environments for learning on14 April
Master Proof presentations of DasArts and Master of Choreography on 2 to 5 June. More information follows. 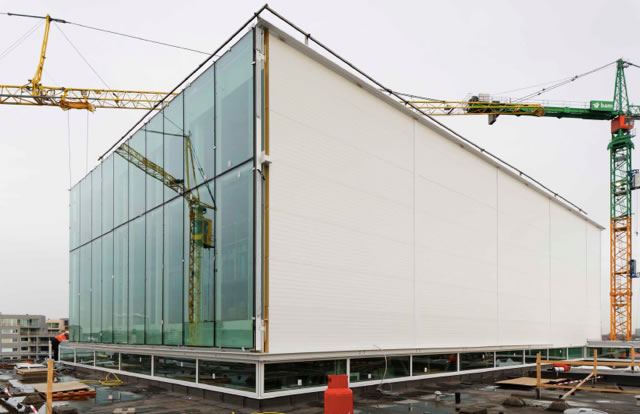