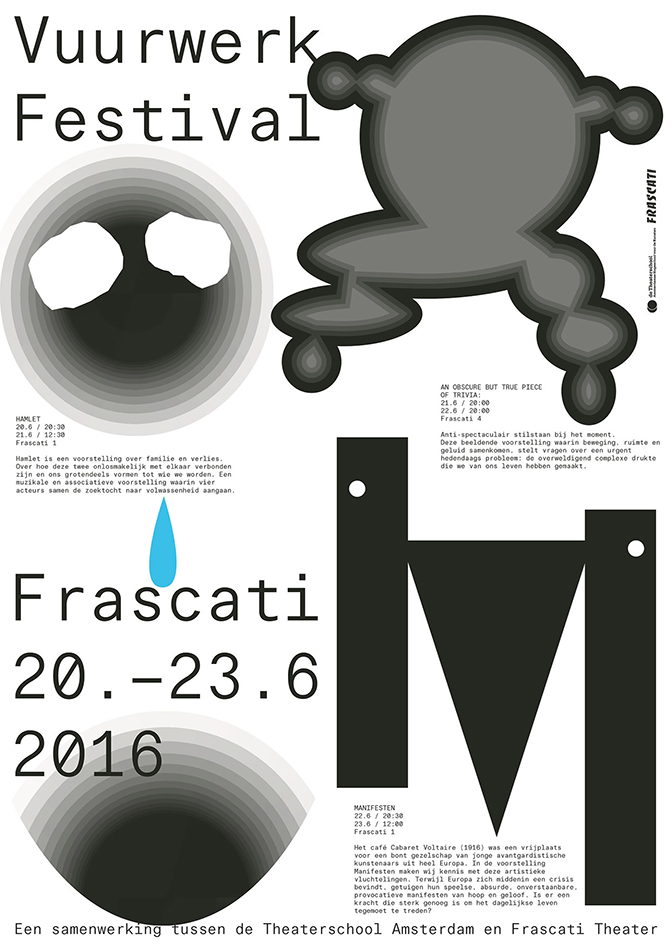 Students from de Theaterschool are putting together a new graduation festival called Vuurwerk (fireworks), scheduled for June 2016. The festival will help them answer this question: How do you stage the best possible graduation show? They have also decided not to take part in the ITs Festival, and thus not compete for the prestigious Ton Lutz Prize. Theaterchool director Jan Zoet and initiators Zarah Bracht and Eline Arbo, graduates from the Theatre Directing programme, explain their decision.

Students from de Theaterschool are putting together a new graduation festival called Vuurwerk (fireworks), scheduled for June 2016. The festival will help them answer this question: How do you stage the best possible graduation show? They have also decided not to take part in the ITs Festival (International Theaterchool Festival), and thus not compete for the prestigious Ton Lutz Prize. Theaterchool director Jan Zoet and initiators Zarah Bracht and Eline Arbo, graduates from the Theatre Directing programme, explain their decision.

The school is buzzing with the question: Is the ITs Festival going ahead this year and are we participating or not?
Jan Zoet: ‘ITs is going ahead as usual this year and we are taking part. But we’re also thinking about the future. Last December the ITs Festival organisers sent a letter to all theatre schools outlining their new direction. Although they are adopting some of the initiatives put forward by De Schaduwploeg (comprising students who for the past two years have been involved in modernising the ITs Festival), they didn’t involve this group or the alumni in the implementation of the new strategy. Neither did they involve the schools.’

What direction will the ITs Festival be taking?
Jan Zoet: ‘Basically, ITs’ new position is that they’ll be taking steps to further loosen the links between the festival and the schools; we’re an independent festival. Among the new elements are the stricter selection criteria for who will be allowed to show their graduation project at the festival. Along with other schools we’ve advocated that students participate in the festival this year in the usual manner, and not according to the newly proposed selection method. But we are considering our future position in relation to the festival. And we’re discussing this among the schools.’

The new initiative, Vuurwerk, is happening at the same time. What’s the relationship between this graduation festival and ITs?
Eline Arbo: ‘I was a member of De Schaduwploeg and co-authored the recommendations to the ITs Festival that we presented in 2014. The link between the festival and the students was sorely lacking. It was all about competition, about every man for himself, instead of celebrating our shared graduation. When ITs decided to disregard the Shadow Group’s recommendations for modernising the festival and present their plans for this new direction, three of us studying Theatre Directing (Eline Arbo, Espen Hjort, Zarah Bracht) decided to realize our ideals and ideas through our own festival: Fireworks.’

How is your festival different?
Zarah Bracht: ‘As the new generation of theatre directors, we have a responsibility to take a position on how we want our graduation projects to be presented. Vuurwerk means we get to create the context in which the works get presented. We want the context of presentation to mean something, to be a meeting point and an open zone where the focus is on the content of our ideas and the thoughts from which these ideas originated. For example, we’d like to introduce one another's work – after all, after four years of studying together, we’re familiar with one another in ways no one else is. We’d also like to hold discussions after the performances, on the content of the works and the creative process. Besides that we’re organising a side programme where we focus on themed discussions and consideration of what the theatre of the future might be like.’

But this means you don’t get to compete for the prestigious Ton Lutz Award.
Eline Arbo: ‘That's right. We believe the ITs Festival focuses too much on competition. Art isn’t a competition. Art for us means viewing critically, asking questions, thinking, and continuing to challenge one another. After four years of study, you’re not presenting your graduation project as the culmination of your development, as if that’s the end of everything; you’re only just beginning!’

Finally, where did the title Vuurwerk come from?
Zarah Bracht: ‘We generally associate fireworks with the transition from the old year to the new; when there’s something to celebrate with a bang. But fireworks also symbolise a grand finale and a new beginning – we are the new generation and we are going to amaze you! We’re on the verge of new frontier and we want to celebrate this together.’

Jan Zoet: ‘I’m fully behind this new initiative. It originated entirely from the students, and you can feel the energy!’