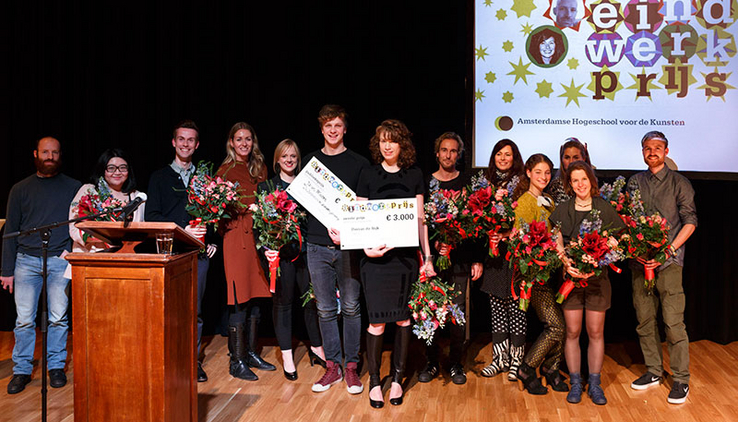 Dorian de Rijk, who graduated from the Master of Film, has won the Amsterdam University of the Art’s (AHK) Graduation Prize 2016 with her project Valerius. The professional jury called her video installation 'a fluid painting'. The Audience Award was won by Joren Molter, alumnus of the Directing Fiction programme, for his graduation film In Kropsdam is iedereen gelukkig (Everyone is happy in Kropsdam).

Nine projects of 2016 graduates from the different faculties were nominated. The jury were faced with a difficult task, as how do you compare choreography with an architectural design, or a heritage thesis with a mime performance? In addition to the graduation projects having been assessed as very good, important criteria for the prize included the way in which students made a connection with the outside world and the relevance of the work for the development of the discipline.

Winning graduation project
Dorian de Rijk received a cheque for €3,000 from Maarten Kloos, chairman of the jury and also member of the AHK’s Supervisory Board. De Rijk graduated from the Master of Film programme of the Netherlands Film Academy this year. In her graduation project, the observer looks at three screens showing the walls of a solitary confinement cell in the deserted psychiatric clinic Valerius. The camera scans the walls, searching for traces of the former residents.

The jury praised Dorian for the integrity and aesthetics of her work. Jury chairman Maarten Kloos: ‘Human affliction is made tangible in the compositions of the triptych. After conducting meticulous research, Dorian handles relevant themes like fear and control. She also broaches topical subjects with Valerius, such as changes in the healthcare sector and the dismantling of the welfare state. However, Dorian does not only tell a story: this is a film which borders visual art - as well as being musical. The jury felt that this filmmaker is advancing her discipline through using the medium of film in an unconventional way.

Audience Award
The Audience Award also went to a project from the Netherlands Film Academy this year. Joren Molter won €1,000 with his film In Kropsdam is iedereen gelukkig (Everyone is happy in Kropsdam). The Bachelor’s graduate from the Directing Fiction programme obtained no less than 31% of almost 1,600 votes.

Molter: ‘The film is about a seemingly peaceful village, where horrible things happen. Lammert would not hurt a fly. He lives with his show pigeons in Kropsdam, in the Dutch province of Groningen. His peaceful life is rudely disturbed when he is suspected of making a deal with the energy company GreenNow, in order to place a windmill on his land.’ The jury called the graduation project a clever work of craftsmanship of great beauty, which fascinates through absurdist feelings of alienation.