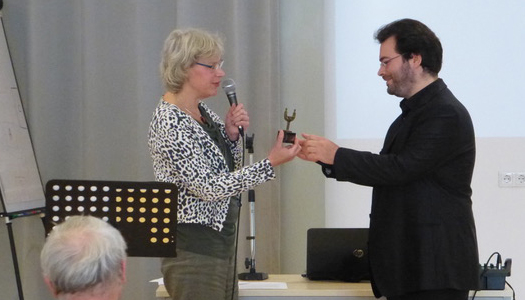 Pianist Christos Papandreopoulos has won the Frans Schreuderprijs, awarded by the European Piano Teachers Association (EPTA), for his master research thesis ‘Towards a Genealogy of Dynamics: The Structural dimension of Dynamics and Tempo Modifications in Performance’.

He is the third CvA student to win this prize; previous winners were Daan Kortekaas (2014) and Kaja Draksler (2013). Christos graduated from the Classical master’s degree progamme in September 2016.

From the jury report:

‘The aim of the research is to examine and expand Heinrich Schenker’s axiom that dynamics are organized according to the deep musical structure of a piece instead of being superficial additions. Along theoretical lines it is argued that dynamics and tempo modifications should be treated as interrelated and that only a flexible musical analysis can be valuable for performance.’

‘The jury values greatly the choice of this subject where analysis and performance meet. The thesis proves to be intellectually rewarding and inspiring ... Deep thought on several musical examples and theoretical concepts, like the meaning of a dynamic swell, is coupled to references to aural examples of great masters on the piano, which strengthens the reasoning.’