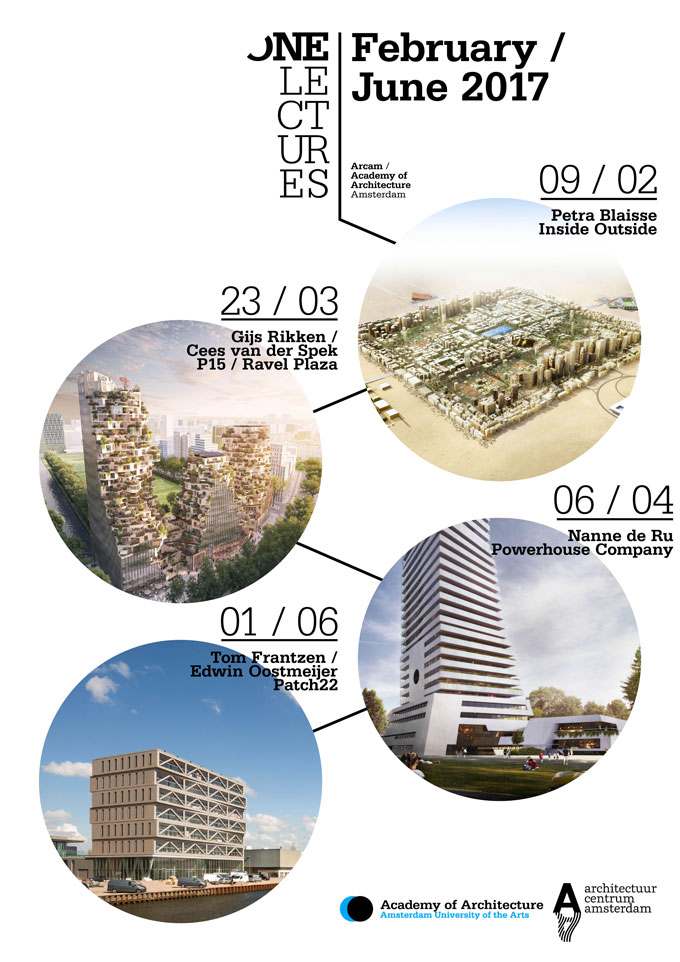 In February starts a new season of the 1·Lectures: the biweekly series of architecture lectures organised by the Academy of Architecture and the Architecture Centre Amsterdam. Speakers from the Netherlands and abroad are invited to talk about a wide range of topics from the international world of architecture, urban design and landscape architecture.

During the first lecture of the new season on February 9, multidisciplinary designer Petra Blaisse will offer a glimpse into her design agency Inside Outside. Her portfolio covers various disciplines and varies richly in scale level. Through her work, she brings the ‘wilderness’ to the city and creates a transitional area between the city and surrounding nature. The soon-to-be completed project ‘Water Recipe Garden’ in Qatar is a good example of this.

On 23 March, the architect Gijs Rikken (MVRDV) and Cees van der Spek (OVG Real Estate) will talk about the P15 project in the Amsterdam business district the Zuidas. They will discuss the selection process and the unusual design. The daring and unique architectural design represents a powerful turning point in the further development of the Zuidas into a mixed area of residences, offices and amenities.

On 6 April, architect Nanne de Ru (Powerhouse Company) will shed light on a selection of his recent projects, including De Bunker in Eindhoven and the Baan Tower in Rotterdam. His firm is also responsible for the Amstel Tower, which will be the highest residential and hotel building in Amsterdam upon completion.

Tom Frantzen (Frantzen et al architects) and Edwin Oostmeijer (Edwin Oostmeijer Projectontwikkeling BV) will give the final lecture of the season on 1 June. As developing architect and developer with architectural ambitions respectively, they will illustrate how their dual role influences their designs, with the unique project PATCH22 serving as one of the examples.

Tickets
Thursday, February 9th, starting at 20h00, at the Amsterdam Academy of Architecture, Waterlooplein 213 in Amsterdam. Tickets at €5 are available in the webshop of the Amsterdam Centre for Architecture. Academy students get free admission with their student card.

Unless otherwise stated, the 1·Lectures will take place at the Academy of Architecture, Waterlooplein 213 in Amsterdam. Always on Thursday evenings, starting at 20h00.