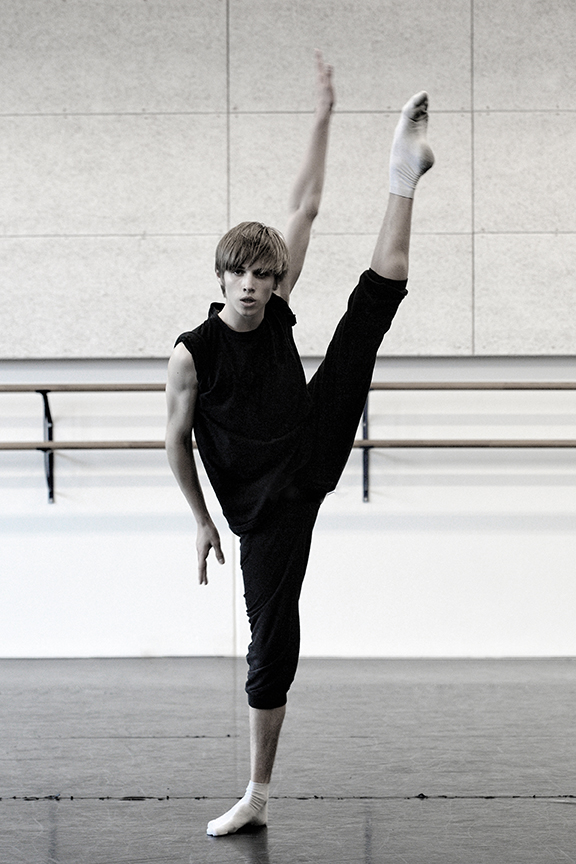 Toon Lobach can still recall the moment he first started to dream of performing with the Netherlands Dance Theatre. ‘I saw School of Thought by Sol León and Paul Lightfoot and was immediately smitten. It was phenomenal! I thought to myself: “I need to be with them!” When my mum and I were cycling home afterwards I told her what I was thinking, and she tried to protect me by lowering my expectations, saying: “They really are very good, you know?”’

Undeterred, Toon focused single-mindedly on achieving his ambition. For the previous three years he’d been a member of the 5 O'clock Class, the preliminary contemporary dance course at the Amsterdam Academy of Theatre and Dance. To deepen his expertise in his fourth year, he also began training with the National Ballet Academy and participating in programmes at Modern Theatre Dance (MTD) and Urban Contemporary (JMD). It all paid off in 2016 when Toon was offered an internship with the young dancers division at the company of his dreams.

Non-stop audition
‘That has been a pretty intense year,’ he says, reflecting on his internship. ‘Actually, it felt a one continual audition. You’re given lots of encouragement, but in the end it’s up to you. You’ve got to keep pushing yourself. And you have to train for so many roles, even though the chances of actually getting to perform them on stage are slim.’
So he has been giving it his all in the studio – day in, day out – but he still hasn’t been given a chance to actually perform. ‘That was definitely a rude awakening.’ It also alerted him to the fact that few interns are ever offered full-time contracts. ‘So I had to audition, just like all the other hopefuls. That's tough because you already feel like part of the family, but then all of a sudden you have to prove yourself to everyone all over again. I approached the audition with confidence – I knew they were hoping to offers contracts to four young dancers – but it was still a pretty stressful experience, and I thought I’d blown my chance.’

Tears of joy
He was given some pointers after the audition: ‘They said I should dial down the sweetness, be a bit more reserved. But then came the exhilarating news that he had earned himself a contract. ‘I broke down in tears in the hallway. All that tension was released in one go. I’d done it, and it felt amazing. All the hard work over the past few months and everything that I’ve got to do in the next few now just feels like it was a massive preparation for next season. Because,’ Toon adds, laughing, ‘you better believe I’ll be doing whatever I have to next year to be in the cast for every ballet.’

Reunited
Toon was thrilled to learn that David van der Veen would be joining him next year – Toon remembered him from the 5 O'Clock Class, which David attended from 2010 to 2014. David is now in his third year of the Codarts Dance bachelor’s programme in Rotterdam. He, too, dreamt for years of becoming a member of Netherlands Dance Theatre. ‘David’s fortunate,’ explains Toon, ‘because the NDT is putting on Alexander Ekman's Cacti next season. All the male dancers are in it, so you only need one to hurt himself – which always happens – and boom, some trainee gets a chance to perform.’ In any event, David is looking forward to the experience. ‘Netherlands Dance Theatre is at the vanguard of worldwide developments in modern dance, so I expect to learn a lot given its such inspiring environment – and I’m going make the most of that opportunity.’