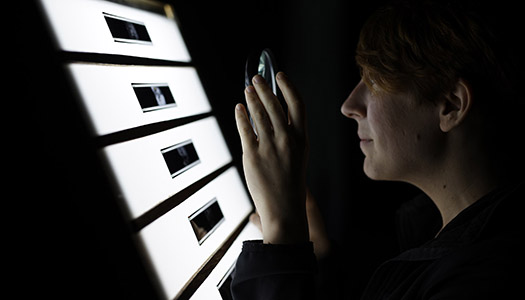 Unique events are planned for 2017 as part of the Artist in Residence programme. Jeroen Musch, Adelheid Roosen, Nick Shepherd, Quincy Gario and Jyoti Mistry will seek out new frontiers and investigate the old ones together with students.

Marineterrein
The Academy of Architecture kicked off AIR 2017 with Artist in Residence and photographer Jeroen Musch. With the project ‘Seeing is a creative act’ (Zien is een creatieve daad), he inspired students to explore the secretive Marineterrein. After being closed off from the outside world for more than 450 years, this site located in the centre of Amsterdam was returned to the city. Musch made the students look at the site through the eyes of a photographer. In teams, they made excitingvideo’s lasting precisely 3:13 minutes.

WijkSafari
Driving force and leader Adelheid Roosen is also seeking out a new location: together with a pack of young theatre makers, students from the Academy of Theatre and Dance, she is going on a neighbourhood safari in Amsterdam-Noord (Amsterdam North). Students from the Theatre Directing, Theatre in Education, Production and Stage Management, Drama & Contemporary Music Theatre and Mime study programmes are entering into a long-term and profound encounter with the local residents. After being ‘adopted’ for two weeks, they will soon create the site-specific show WijkSafari.

One-year walking trip
Under the inspired guidance of South African archaeologist Nick Shepherd, students from the Reinwardt Academy will be going on a one-year trip: they will be walking from Amsterdam via Berlin to Kiruna in Sweden. Shepherd is one of the initiators of a research project that brings up heritage issues for discussion in relation to urgent themes, such as climate change and social integration in society. His project The Walking Residency focuses on walking as a heritage method. In Shepherd’s vision, walking is a means of connecting places, identities, stories, climate, nature, people and animals with each other. Walking enables students to relate to the consequences of climate change and identity politics in a completely new way.

Progressive criticism
Decolonisation was an important theme during the AIR workshop PAPI: Poging Andere Politieke Interventies (Attempting Different Political Interventions) of poet, theatre maker and activist Quinsy Gario in December 2016. During a week-long, intensive dialogue, in which various speakers provided input, Gario examined how progressive criticism can take shape in artistic work together with students from the School for New Dance Development and the Theatre Directing programme. In addition, they reflected on decolonial thinking, Caribbean and Latin American performance art, African art and concepts like liberation, black consciousness-raising, and movements of migrants and refugees in the Netherlands. In May, Gario will return for a lecture on diversity.

Narrative strategies
At the Netherlands Film Academy, the Master of Film will be extending its 2016 AIR programme with the film maker, visual artist and film theorist of Indian/South African origin Jyoti Mistry. Her residency focuses on the relationship between research, practice and educational theory. As an example of practice-oriented research, she completed a project with master students in the archives of the EYE film museum,  the location par excellence for inquiring into historical and political contexts, and developing alternative narrative strategies. The result could be viewed during the impressive exhibition Archive as a place to play in the EYE. In 2017, Mistry will continue her research and will concluded by showing her own work in EYE in June.

Publications
In the spring, the publishing company ON AIR will publish the (visual) essay of Jyoti Mistry in response to her residency. A short documentary based on WijkSafari maakt school (Neighbourhood Safari does school) will be made by film maker Ellenoor Bakker. Would you like to receive a publication or would you like to be informed of the developments, public events and results of the AIR programmes? Check ahk.air.nl

An Artist in Residence inspires students and teachers at the Amsterdam University of the Arts by confronting them with topical developments and issues from the arts practice. Innovation and connection are the main focus of these tailor-made AIR programmes, as well as the international and multidisciplinary context.