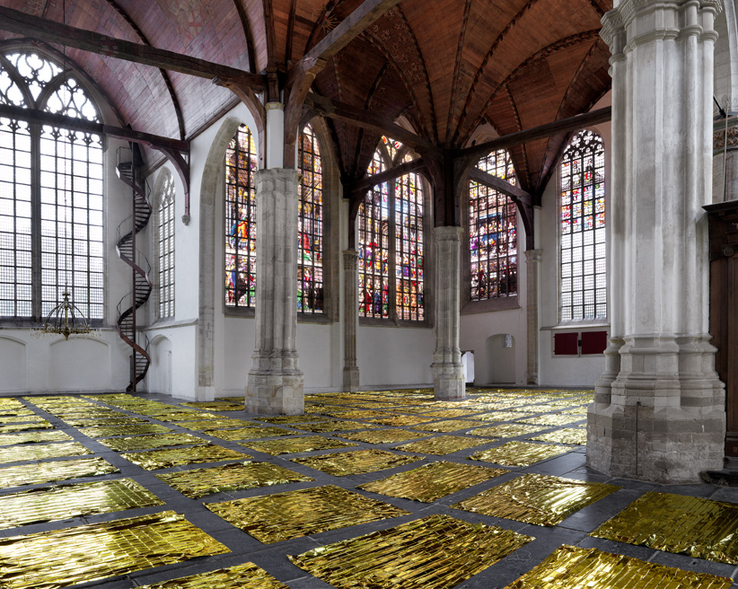 In order to research the emerging role of silence within the architectural practice, the Amsterdam Academy of Architecture has joined forces with the artist Sarah van Sonsbeeck as part of the Artist in Residence (AiR) programme. Sarah graduated in architecture from TU Delft, but then studied art at the Gerrit Rietveld Academie and the Rijksakademie van beeldende kunsten (National Academy of Visual Arts) in Amsterdam. The many facets of silence are her inspiration and a recurring theme within her work.

Why work with an AiR?
Her noisy neighbours made Sarah aware of the soft border of her home. On paper at least, ownership of a house may end at a physical border, but sound definitely does not. In 2006, she asked her loud neighbours to pay a portion of her rent, due to the space they were taking up in her home with their sound. She dubbed this mental space in her body of work. She then went on to develop other means of reclaiming space, such as the Faraday Bag (2010), a ‘democratic tool for data silence’ that shields your phone from electromagnetic networks, and the Anti Drone Tent (2013), rendering the inhabitant invisible to thermal imaging cameras, as used by drones. Inspired by the Occupy Movement, she sees this not as a means to oppose a regime en masse, but as a means to a personal occupation, thus reclaiming space. More recently, she used the golden, shimmering Mylar rescue blankets, which the Anti Drone Tent was made of, for a site-specific installation in Amsterdam’s Oude Kerk (Old Church). This work was influenced by the surrounding architecture (its historic meaning and patterns), as well as philosophical concerns. The notion of rescuing and the Mylar rescue blanket, which is given to refugees, were linked symbiotically with the context of the Oude Kerk. The work whispered as you walked through it.

Newspaper NRC on this exhibition: ‘a confronting limbo between painful and beautiful’

The space we presume to be our own (privately, architectonically, lawfully) is much less solid than we think. A new generation of designers, such as the Academy of Architecture’s students, are also seeking to research and develop our mental space. How do we experience the space that is designed for us? And how do all our senses, not just one, play a part in this?

‘Who knows, when the next government is being formed in the near future, maybe they will not only negotiate about the climate and greening, but also about the right to silence.’
Britta Böhler in Dutch newspaper de Volkskrant, 2 July 2017.

Research
For all these reasons, we hope the Winter School of 2018 will be inspired by Sarah’s artistic research into silence. In this two-week research and design programme, all three disciplines of architecture, urbanism and landscape architecture will join forces, represented by first-, second- and third-year students (only graduate students are exempt). We believe this new role of silence in architecture can only be addressed through such interdisciplinary cooperation. During the Winter School, we hope to give all students a chance to encounter and be influenced by the artist in residence. Other AiRs have previously made a lasting mark on this specific course. In the last edition, the ways we see and how they determine the design practice was brought to light with much success by the photographer Jeroen Musch.

The goal of the Winter School is to get students to think outside the box, and to make them realise they have more means at their disposal than they may have thought and that these means can be used to influence many layers of reality. We also hope to contribute to the knowledge of the immaterial space, the mental architecture that is one of the main tools in addressing silence in design. These components are equally as powerful as the physical ones and no less influential, in spite of the fact that they are not directly visible.