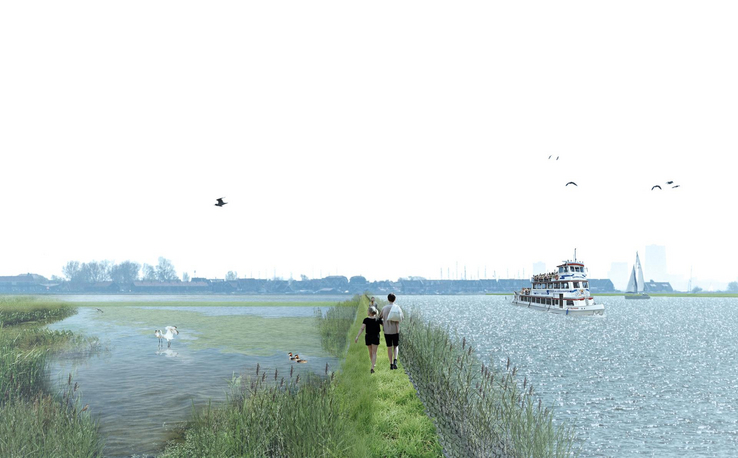 Esther van der Tuin graduated in 2017 in the master's degree in Landscapearchitecture with her graduation project The Dyke Movement. On Friday, February 16th is the public graduation presentation at the Academy of Architecture.

The Dyke Movement - Three Unique Sides that Move Marken Towards the Future
Marken is a beautiful island (peninsula) where time seems to have stood still. The  monumental mounds (terps), which used to protect the inhabitants of Marken against annual floods, are now flooded with tourists. The balance between the normal everyday life on Marken and tourism is missing. The distribution of visitors in terms of both time and space is minimal and at the same time there is a shortage of family homes in order to guarantee the preservation of functions on the island. In terms of planning, Marken is ‘locked’ and this limits spatial renewal and innovation.

There is an overflow dyke around the peninsula Marken, a primary water-retaining structure.  As owner of the dyke, Rijkswaterstaat (Directorate-General for Public Works and Water Management) has stated that the western and southern embankments no longer meet the desired safety standards and need to be reinforced. There is a lack of height, macro-  instability and/or insufficient dyke revetment. With respect to the rest of the island, the circular dyke of Marken is less impeded by the spatial regulations, because safety is paramount. In this way, this dyke is, in many respects, the ultimate element that starts the movement towards a more robust and futureproof Marken in terms of living, recreation and nature development.

The circular dyke of Marken consists of three characteristic sides for the island. Each side   tells a unique story about Marken both spatially and functionally. A choice has been made to preserve this and to emphasise the identity of each side and to execute it through site specific dyke reinforcements.

The western embankment is now a low angular dyke. The dyke barely has to be raised further, but this side does have to be protected against wave runup. In addition, it is a shame that the unique village silhouette is barely visible from the dyke. The proposal is therefore to spare the western dyke from reinforcement, but to use it in the construction of ‘lee dams’. As a result of this, the dyke is protected against wave runup. The lee dams emphasise the angular identity of the dyke and they simultaneously form new routes and sightlines in the direction of the village silhouette.

They also provide visibility and protection of the foreland, that is still present here outside the dykes. Furthermore, they contribute to further diversity and nature development in the Gouwzee. The ‘lee dams’ provide space for a new form of tourism, which will especially be stimulated in the winter period. As a result of this, people are invited to spread across the island, not only spatially, but also in time. The southern embankment will use its winding dyke character to emphasise the mounds as icons in the open, vast landscape. The winding dyke will be preserved by raising it carefully and reinforcing it inwards or outwards.

By building a landing stage for larger cruise ships on the south side of the island, Marken will be better connected with Amsterdam and increasing tourism towards the Marker Wadden. A transferium will be created whereby numerous combinations of (public) transport and routes across the island will be possible. The use of the dyke, as route around the island, will also be better regulated through this. The reinforcement of the northern embankment can contribute to the start of futureproof living in keeping with the village conservation area. So that visitors can see that inhabitants of Marken are still alive, taking account of the water. In this way, the three dyke sides can, on their own but especially through their interplay, enable Marken to move towards the future.

Time and location
Friday 16 February, starting at 16:00, in the Hoge Zaal of the Academy of Architecture, Waterlooplein 213 in Amsterdam. Open access. Language: Dutch