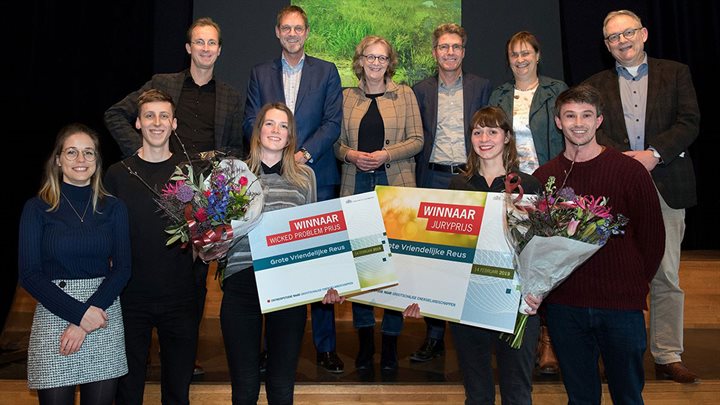 The design competition Grote Vriendelijke Reus (Big Friendly Giant, GVR) came to a close on 14 February during the Dag van de Ruimtelijke Kwaliteit (Day of Spatial Quality), organised by the province of Utrecht. Following an expert assessment of the designs, the professional jury announced the winner.

The design competition was created in mid-2018 in response to a recommendation from the independent spatial quality adviser Paul Roncken to the province. Utrecht Provincial Executive member Pim van den Berg provided a platform for the designs with this design competition. The results of the competition demonstrate innovative ideas about and perspectives on energy landscapes. As a result of this, it appears that possible solutions for the design of large-scale energy landscapes may be more varied than we currently think.

Design commission large-scale energy landscape
How can you generate 2 petajoules (PJ) of energy in the form of a large-scale and iconic landscape? Eight students from the Amsterdam Academy of Architecture set to work on this design question in the autumn of 2018. After a few months of researching and designing, the students presented their visual designs to a large audience during the Dag van de Ruimtelijke Kwaliteit (Day of Spatial Quality). Following this, the jury presented the jury prize to the winning designer and the winner of the Wicked Problem Prize was announced by Paul Roncken.

Wicked Problem Prize awarded
In addition to the jury prize, an incentive prize was up for grabs, the Wicked Problem Prize. The focus of this prize was to effectively identify the social challenge of connecting current landowners in a historic yet declining landscape with new energy landscapes. With her design ‘Land van Successie’ (Land of Succession), Hester Koelman demonstrated an ability to make almost all aspects of this complex issue concrete.