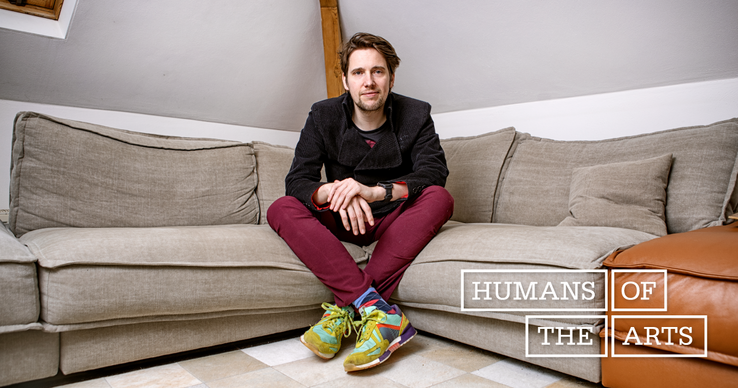 During his study at the Amsterdam Drama and Contemporary Music Theatre, Thomas Spijkerman founded the music theatre collective Circus Treurdier. He is now a teacher at the same study programme and he started the production house Heelal BV: ‘trading house for fantasy and solace’. We interviewed him about his entrepreneurship and his vision on the cultural sector.

What are you working on currently?
“Together with my colleague and life partner Henriëtte Olland, I started the production house Heelal BV. We develop interactive work by theatre makers and artists in the public and commercial sector. Fantastic work is being created in the cultural sector, which doesn’t always find the audience on which it can make the biggest impression. That is why we want to build bridges to other sectors.”

In a previous interview you said that you saw entrepreneurship as part of your artistic practice. What do you think about that now?
“I still feel the same way about that actually. Perhaps I now see that even more holistically. I see my theatre making practice, artistic practice and entrepreneurship as a single entity. I no longer make that separation. As a theatre maker, you want to create something. That includes an audience that you want to reach and to do that, it must be pre-financed. Those things must be interconnected, in order to ultimately create a relationship between the audience and the artwork.”

“When you graduate as a theatre maker from an arts programme, one way or another you will need to be able to create your own work field. In the future, many students will have a hybrid practice, setting up their own projects, then performing in a show or contributing ideas within a process. You want to train them to start shaping the work field of the future themselves. That means that you must train them to develop a certain mentality, flexibility and entrepreneurial orientation. My ‘Theatre Making and Entrepreneurship’ lessons also deal with that. If you make theatre, you want to tell your audience something and that includes everything involved with that. Writing a publicity text, for example, is simply part of your work: it’s the first impression that your audience will get of your work.”

“In the first instance, it’s about the mentality with which you approach the professional practice. Specific entrepreneurial skills come later. I notice that it’s only worth actually talking about drawing up a budget or establishing a foundation if there is a desire to do so. If they receive questions from a client about VAT, if they want to apply for grants or subsidies with funds after graduating or if they have to submit a budget for the Fringe Festival, they have an enormous intrinsic motivation to understand that. That is why I encourage students to get themselves out there and set up things already outside their study. In that way, you come across everything you need. If you don’t come across it, you don’t need it.”

What do you think is the most important value of art for society?
“Theatre makers and artists can make major social themes palpable. They train people’s fantasy and capacity for empathy. They learn to think outside the box. As an artist, you can literally turn an alternative reality into reality. That doesn’t necessarily have to happen in a theatre or museum. For example, I did a pilot for the project De Lege Winkel (The Empty Shop), which I developed at the ‘Local School’ of the DAS Graduate School. That was a shop in the PC Hooftstraat where I sold emptiness from 9 to 5. I was personally very happy with that project; felt like I was busy with something extremely meaningful. It was a fantasy, but at the same time it was reality. Shopping public walked past and came inside with widely varying motivations. Conversations arose, shared fantasies and, of course, the required quantity of emptiness was ultimately purchased. It was a proposal for a new layout of a shopping street. It gave me an immense amount of satisfaction to see that fantasy literally end up in our streetscape.”

“We collaborate with the theatre maker Emke Idema at Heelal BV. Her project Stranger is a life-sized party game in which you are confronted as a participant with your prejudices and first impressions.  You pass judgements based on faces on the stage floor. That form appeals to a wide group of people. We saw that play in Theater Rotterdam Schouwburg. We thought that it would better suited to places where stereotyping plays a major role in daily practice, such as at the Police or the Tax and Customs Administration. However, there is not yet a good infrastructure in the cultural sector for that. With Heelal BV, we want to create an optimal match between content, form and location, so that such a project can have a greater impact on society.”

“If your work is successful, I actually believe that you almost have an obligation to think about how your project can reach the largest possible audience for a lengthy period of time.”

“I think that we need to think about new forms in which theatre and art can make their value more visible. For example, the location where a work manifests itself is part of the content. You cannot see those things separately from each other. You can’t say: I want to reach a wide audience and subsequently perform your show in the theatre. Because the theatre is also a place with a threshold for many people. You are allowed to do that, but you must also accept then that not everyone will cross that threshold.”

“I also find it inspiring to think about scalability, which the cultural sector is not so concerned with. There is a type of myth that the artist himself/herself should be the only person that can carry out a project. But many things are simply replaceable and can be performed with the same quality by others.”

“There is also often an aversion towards thinking about scalability in the cultural sector and a sense that it’s not necessary. It’s as if we are all in a sort of never-ending research & development department. I think that’s an unhealthy and unsustainable situation. Things are often produced or programmed for just one season. That’s a waste. If your work is successful, I actually believe that you almost have an obligation to think about how your project can reach the largest possible audience for a lengthy period of time. After all, it’s financed with government money in many cases, everyone has paid towards it, so you must do your best to ensure that as many people as possible see it.”

How is the coronavirus crisis changing your work field?
“Digital theatre is booming, of course, among people who are interested in any case in innovation and technological developments. People also say that it can never replace a live performance. I would dispute that. Especially if you look at the developments with regard to VR and AR. There is a lot of new ground to be explored in that field for theatre makers. I am busy with that and enjoy it a lot. If you are able to work digitally in an effective way, you can reach an enormous market, also internationally.”

Are you still working on Circus Treurdier?
“In 2018, I left Circus Treurdier, because our visions differed and I wanted to set up different types of projects. Circus Treurdier is still making theatre and television. It was successfully transferred to TV and it was nominated for a Gouden Kalf award. That is amazing and more than I ever dreamed of beforehand. I come to all shows and am still a fan of the work. It was a turbulent, but also very beautiful period in my life.”

Where do you see yourself in a few years’ time?
“I would like to work abroad more. I see myself as European and I would like to shape that identity more. Together with Henriëtte, I’m busy seeing if we can set something up in Athens. Perhaps a residency. We love that city a lot.”

“Furthermore, I would like Heelal BV to be a financially and artistically healthy initiative. We should demonstrate that art, in addition to its artistic value, may also have a social and financial value. People must learn to pay for what art is worth.”

What tip would you like to give for starting artists or students?
“Start walking and you will automatically come across what you need to come across. Have faith that the direction in which you are walking is the right one. If not, you will find that out of your own accord and adjust your course. But keep moving.”

Can people register with Heelal BV?
“Absolutely! I think it’s important that they take a careful look beforehand at our explicit vision about the type of work that we accept. If people feel attracted to that, we always enjoy meeting new people and entering into discussion.”

Humans of the Arts & BeroepKunstenaar.nl
There are approximately 3,000 students and 900 employees at the Amsterdam University of the Arts. Everyone has his or her own story. Those stories, whether they are connected with study/work or not, are the main focus in Humans of the Arts. Would you like to share your story? Please, email communicatie@ahk.nl, and we will contact you.

This interview is also part of a series of interviews with alumni at BeroepKunstenaar.nl.