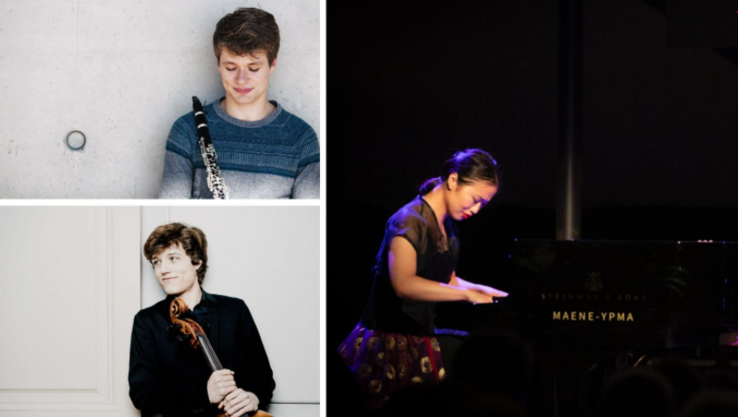 Jelmer de Moed (1995) graduated from the bachelor’s programme at the CvA, where he studied with Arno Piters and Hans Colbers. Currently he studies in the master’s programme at the Hochschule für Musik Hanns Eisler in Berlin. He organises special projects, such as the interdisciplinary production ‘Prikkel’, which included performances at Oerol and the  Grachtenfestival, the project ‘Symbolisme’ around Olivier Messiaen’s Quatuor pour la fin du temps, and ‘Bevangen’, an ode to Dutch composer Tristan Keuris.

Yang Yang Cai (1998) studied with Jan Wijn at the CvA, graduating from the bachelor’s programme with the highest honours. Currently she studies with Enrico Pace at the Imola Piano Academy in Italy. Ze won many prizes, including the Classic Young Masters Award 2017 and the Grand Prix Youri Egorov at the Young Pianist Foundation Competition. Yang Yang performs regularly at major festivals at home and abroad, such as the Grachtenfestival, The International Holland Music Sessions and Aspen Music Festival and School 2018 (USA). She also appeared several times on the Dutch TV show Podium Witteman.

Alexander Warenberg (1998) studied with Monique Bartels at the CvA, continued his studies at the Barenboim-Said Academie and is now studying at the Kronberg Academy in Germany. He won prizes at the National Cello Competition in Amsterdam and the Antonio Janigro International Cello Competition. He performed at the Concertgebouw Amsterdam, at festivals including the International Chamber Music Festival in Utrecht, the Grachtenfestival, the Festival Bad Ragaz in Switzerland and Wonderfeel Festival, and appeared on Dutch TV and radio. As a chamber musician he gave concerts with Menahem Pressler, Denis Kozhukhin, Gil Sharon, Paolo Giacometti and Lucas Jussen.

The winner will be announced during the Evening of the Grachtenfestival Prize on 20 August 2021.