Marijn de Langen works as performing arts theorist and historian within diverse Dutch art educational institutions. She is currently completing her PhD in Theatre Studies at Utrecht University (working title: Nederlandse Mime, een manier van denken). She teaches theory at the Amsterdam Academy for Theatre and Dance since 2002 (Mime department), at ArtEZ University of the Arts since 2012 (Transfer 3||4 : Honours Programme Theory and Research) and she is a regular guest teacher in the department of Theatre Studies at Utrecht University.

Her PhD research focusses on the identity and historical development of Dutch Mime as a form of thinking in and through practice, and is based on a large scale historical research that she has led since 2008 supported by the AHK professorship Kunst Theorie en Onderzoek (Prof. Henk Borgdorf). This research has - over the years - led to a variety of outcomes: publications, symposia and gatherings. Marijn has published in theatre journals like TM, ETCETERA and Theater Der Zeit. She has initiated numerous encounters within the field of contemporary performance, amongst which is the recent series There is a discussion. In this series of meetings, performers are invited and challenged to reflect in writing on their specific embodied knowledge. Maker/performers as Boukje Schweigman, Jochem Stavenuiter, Danielle van Vree and Willemijn Zevenhuizen are amongst the participators. She was the initiator and editor of the publication Het is /It is, negen ontmoetingen tussen theatermakers (RTRSRCH vol. 1, No 2, 2010).

Marijns teaching at the Mime department at the Amsterdam University of the Arts led directly to her PhD project. This project developed out of her growing understanding of, and fascination with Dutch Mime; a little-researched, but rich field  in the Dutch post-World War II theater landscape.  Inspired by approaches to the writing of (local) theatre histories by theoreticians such as Mike Pearson (Mickery Theatre) and Heike Roms (‘What’s Welsh for Performance?’); Marijn is searching to create an archeology, a memory for/of Dutch Mime 1951-2010.

There are interesting and striking contrasts between ‘Dutch Mime’ and what ‘Mime’ refers to in a more international context. This contrast raises important questions. What exactly ‘is’ Dutch Mime? Or, more precise: what does it do? How does it think and create? What are cornerstones in this way of thinking, this approach to theatre?

From the 1950's the field of Mime evolves in the Netherlands, closely related to visual arts and questioning the poetics of text-based theatre. Dutch mime performance situates the body-in-space, or - maybe more correctly- the body and space as explicit centers of a performance’s focus.

In the process of writing and researching, several projects and are being created such as Mimedenktank (2007) a two day - think tank, where mime-performers of different generations met and, in an intimate setting, rethought several aspects of the mime discourse and heritage. In 2010 Marijn published 'Het Is-It Is' (RTRSRCH vol. 1 no. 2), a collection of dialogues between theatre makers in the mime field, of different ages, nationalities and backgrounds.

In 2012, thoughts were developed around archiving; is it possible to create an archive of essential sources on mime, simultaneously evolving and accessible? A first step towards shared thinking about this was taken in may 2012, when Marijn organized ‘Mime Memory Boom’: an event where all students and teachers of the mimeschool were invited to think together for a day on how historical knowledge might ‘work’ in the present, how (and why) a possible archive might be created. During this meeting, a first collection of relevant historical sources was assembled (a Sourcebook nr. 1.0) : articles, reviews, quote’s, writings. Besides current teachers and students, also Frits Vogels was invited, founder and first artistic leader of the Mimeschool (1968). 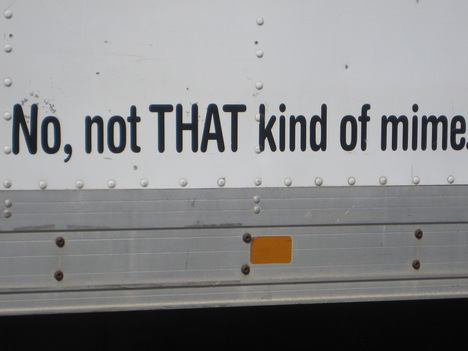