Society is changing and life in the international music world is increasingly shaped by music from diverse traditions and cultures. As has been demonstrated by the Nieuw Ensemble and Joël Bons’ experiences with the Atlas Ensemble and other collaborative ventures, the artistic achievements of other cultures and the expansion of instrumental formations with non­-Western instruments are simultaneously a complex challenge and a rich source for the musical language of the future. The key question is whether it can provide solutions for relevant professional musical education in an international and intercultural context.

During his period as AIR, Joël Bons explored the opportunities that can be created by combining musical cultures, for composition, performing and teaching practice, as well as for research at the Conservatorium van Amsterdam (CvA). Joel Bons takes a clear non­-globalist approach: ‘Things don’t have to be like each other. Rather, it is the very differences that harbour unprecedented potential. The newness is not invented, but found – by combining elements that have never before been combined.’

Joël Bons’ AIR project is also an advance ‘taster’ for the Atlas Academy, a proposed annual meeting place at the CvA where international musicians, composers, conservatory students, musicologists and university students can expand, share and examine their interest in and knowledge of other musical cultures.

About Joël Bons
Joël Bons is a composer and the co­founder and artistic director of the Nieuw Ensemble (NE). He is also the driving force behind Atlas Ensemble, a unique chamber orchestra that unites musicians from China, Central Asia, the near East and Europe. He was awarded the Amsterdam Arts Award in 2005 for his work with the Atlas Ensemble. As ensemble in residence at the Amsterdam Conservatory, the NE regularly organizes an educational composers’ practicum.
In 2008, Bons became the coordinator of the composition department of the Conservatory. 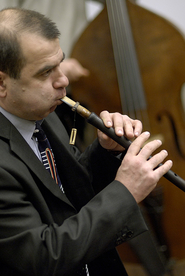