How to like everything started as a research project that explored action in complex environments and that would help in handling the rigours of emergence. ‘Because when you make something new in the world, you have to do it with the knowledge that the world is already replete with things both fine and ugly, and is becoming more so all the time, and that your contribution is but a tiny part of it.’ An example is the idea of A National Park for the Netherlands (winterworkshop 2005–2006): ‘It’s more complicated than what we take for granted, those protected landscapes and areas of outstanding natural beauty of contemporary Europe. In the UK half a century ago areas of protected land were set up around the big cities to stifle unplanned growth – they called them Green Belts. The city parks constructed in dense urban areas were called Green Lungs by the public-health minded Victorians.

In the Netherlands there is a protected area, almost mystically revered, called the Green Heart. What is this cliché of Green really about? Is it some new fairy tale? The ultimate Green place is on Flevoland, in the Netherlands.

This is new land, drained from the sea only one generation ago, and on it there is an area set aside for wild things, where no humans are allowed to go. It is a national park that’s no longer for people. The Green myth has eaten itself. So now can we reorganise the understanding of what a national park is?’

About Paul Shepheard
Paul Shepheard is an architect, critic and educator living in London. He is the author of Artificial Love, A Story of Machines and Architecture (2003), The Cultivated Wilderness: Or, What is Landscape (1997) and What is Architecture? An Essay on Landscape, Buildings, and Machines (1994). He is an architecture writer who defies categorisation and whose unorthodox vision on architecture includes sculpture, machines and technology, encapsulating the history of the human species. www.paulshepheard.com 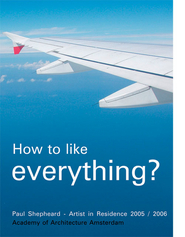