Maaike Bleeker’s research focuses, broadly speaking, on two questions: is theatre a form of thought?; and how can theatre be deployed to take a critical standpoint with regard to contemporary visual culture? As AIR at the Theatre School she used the connecting theme Limits to imagination? to explore issues such as whether the Prophet Muhammad may be depicted; whether it is possible to make theatre about the Holocaust; in what ways the events in Srebrenica have been taken up in theatre and film; how implicit and explicit forms of propaganda function; and whether there should be legal restrictions on what can be portrayed – and, if so, who should impose them. A good example in this context is the work of Dutch theatre collective Hotel Modern. Their impressive productions The Great War (2001) and Kamp (2005) demonstrate the potential of theatre to stimulate the imagination while exploring the limits of what can, should or may be shown on stage; Hotel Modern explores the limits of imagination by reconstructing scenes and situations live using scale models, recreating First World War trenches and Auschwitz, and projecting the resulting images on screen.

‘It is as if they are using their work to explore what must have happened there by producing images that are so familiar, whether we have seen them before or not.’

About Maaike Bleeker
Maaike Bleeker, dramaturge and publicist, is professor of theatre and dance studies at Utrecht University. Her articles have appeared in various national and international periodicals and many books. As part of her Veni research project  See Me, Feel Me, Think Me: The Body of Semiotics (funded by the Netherlands Organisation for Scientific Research), Bleeker organised the Anatomical Theatre Revisited conference in 2006. She is co­publisher of Theater Topics. Her book Anatomy Live: Performance and the Operating Theatre, is just out, and Visuality in the Theatre. The Locus of Looking (2008) will soon follow.

Hotel Modern is a Dutch theatre collective, established in 1997. Its members are Arlène Hoornweg, Pauline Kalker and Herman Helle. ‘Broadly speaking, our work deals with the brutal absurdity of the world. We steer a course between illusion and reality, documentary and fiction. 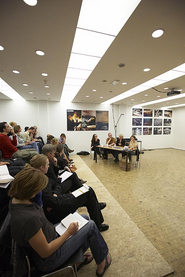 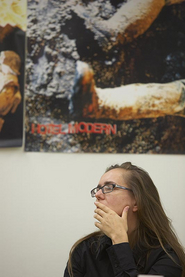