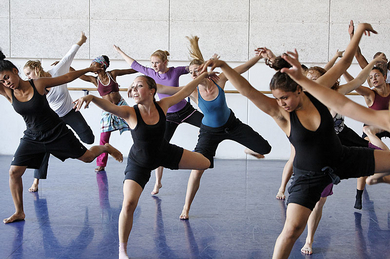 Dance teachers working today are operating at the very centre of contemporary urban reality, where there is growing demand that what they produce relates to people from diverse origins. Teachers are expected to be able to bridge the gap between familiar and unfamiliar dance forms, and have an understanding of both popular and traditional dance cultures. From 2005 to 2010, the artistic director of the Bachelor of Dance in Education Jopie de Groot pursued the development of an intercultural vision and policy at the school. To this end, she deployed the AIR programme twice  as a powerful tool for accelerating change within the department. Following the residency of Nita Liem and Don’t Hit Mama (2007-2008), De Groot invited the ‘mother’ of contemporary African dance Germaine Acogny into the school to take the next step in this process.

Germaine Acogny visited Amsterdam several times for intensive working periods at the Amsterdam University of the Arts. Her unique practice offered teachers and students insights into how they could connect between the norms and values bound up in European and African dance styles. Artist in Residence Germaine Acogny – accompanied by her son Patrick and a team of teaching staff from the Ecole des Sables in Toubab Dialaw, Senegal – gave teachers and students an intensive introduction to her techniques, working methods and vision on education. The collaboration also triggered a debate on tradition and renewal within the department, giving a powerful boost to its intercultural ambitions.

About Germaine Acogny
Germaine Acogny is Senegalese and French. She founded her first dance studio in Dakar in 1968, influenced by the dances she inherited from her grandmother, a Yoruba priest, and her studies of traditional African dance and classic and modern Western dance in Paris and New York. She worked closely with Maurice Béjart and was the director of the Mudra Afrique dance school in Dakar from 1977 to 1982. In 1980, Acogny published her first book, African Dance, in three languages. In 1998, she founded the Jant-Bi dance company and, together with her husband Helmut Vogt, the Ecole des Sables in Toubab Dialaw, Senegal. In recent years, this dance centre has become Africa’s most important institute for the development of professional dance. Germaine Acogny dances, choreographs and teaches on every continent. She is a true ambassador of African dance and culture. Acogny’s work is highly regarded throughout the world and her awards include knighthoods from France and Senegal. 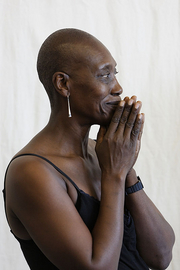 Germaine Acogny in ON AIR #2, 2011
Finding the multiple body, by Funmi Adewole Kruczkowska in ON AIR 4