Musician, composer and theatre maker Paul Koek is Artist in residence from 2009 untill 2011 at de Theaterschool. Koek is working with teachers and students at the Production and Stage Management department to develop their vision on the professional of the future and to build bridges between innovative artistic and educational practices. The activities form part of Veenfabriek's ongoing project 'Het platteland als Podium' (The Countryside as a Stage) and take place throughout the 2010-2011 academic year.

Experiences of students and the results of Koek's residency are published in: 'Zij aan zij, rug aan rug, produceren in de podiumkunsten' (in Dutch)

About Paul Koek
Paul Koek (Roelofarendsveen, 1954) studies at the Royal Conservatory The Hague. He was part of many ensembles, under wich Hoketus with componist Louis Andriessen. After his study Koek was connected with Toneelgroep De Appel. In 1987 he went with Theatergroep Hollandia and became co-artistic director in 1993. Within Hollandia he founded the Veenstudio to stimulate the development of music theatre further more.
In 2005 Koek continues independant with de Veenfabriek, a labatory and productionplace for music theatre. As director he made (among others) the performance Voet (2005) and Smekelingen (2006) and the location theatre piece Haar leven haar doden (2007).
De Veenfabriek had his own ensemble: TRACK, where Koek forms part of as percussionist. Since 1991 he teaches also Music Theatre at the Royal. 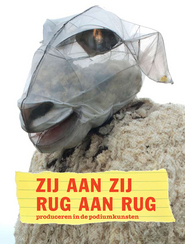 Read the interview with Paul Koek and Anthony Heidweiller in ON AIR #2, 2011