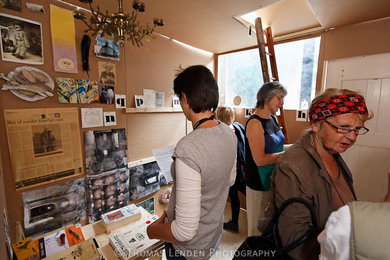 The Technical Theatre Arts Study Programme trains professionals to make artistic  ideas possible with the help of theatre technical means. Because they occupy a leading position, theatre technicians are a crucial link between a director or choreographer and the realization of an entire theatre scenery. That requires a combination of many qualities. Technical Theatre Arts students must not only excel in their discipline, current trends also demand that they are flexible, creative and imaginative.

For students, teachers and supervisors the collaboration with Rieks Swarte was a fantastic challenge. Swarte is known to design dazzling productions with a minimum of technical devices. The motto that Swarte made up for his Artist in Residence at de Theaterschool is: “You can observe a lot by just watching.” (Yogi Bear)

To kick off his residency Rieks Swarte exhibited his sculpture the Cabanon at de Theaterschool. With the help of students he erected this spatial installation made of wood and cardboard in the week of 18 June. The Cabanon gives a glimpse of Swarte’s environment and thinking, it is a unique “self-portrait in architecture”, based on designs by Le Corbusier and the principles of golden ratio.

About Rieks Swarte
Rieks Swarte is director, designer and puppeteer. He studied directing simultaneously at de Theaterschool and the Vrije Academie in The Hague. He has been active in the theatre as maker and player since the 1960s. Swarte’s work is inspired by children’s books, pictures, random objects, sudden downpours, a good book, a film, a historic moment or special places in the world.

Characteristic for Swarte’s performances is the visual power and the unique interaction between players and objects. Sometimes a text is the basis of a piece, but just as often not. This is most evident in Swarte’s toy productions for viewers from 8 to 88. Swarte also creates lecture performances in which he takes complicated subjects from history, art and science and turns them into an educational showpiece, making them vibrant and comprehensible.

In 1992 Swarte established his own ensemble, De Firma which performs in small and large theatres in Holland and Belgium or on location. De Firma’s home base is the workshop for experiments, a studio in the centre of Haarlem. The Haarlemse Toneelschuur is their traditional performance venue. Next season Swarte is scheduled to create the scenery for Pinocchio by the Toneelmakerij (director Liesbeth Coltof) 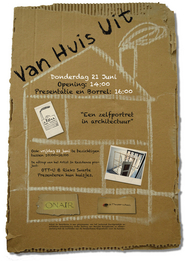 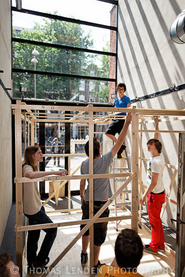 Zelfportret in achitectuur, by Viveka van de Vliet 2 juli 2012 www.items.nl  (in Dutch)
Students keep a blog about their experiences with AIR Rieks Swarte (in Dutch)
'It's all about transfer', conversation between Marijke Hoogenboom and Rieks Swarte in ON AIR 5, December 2012 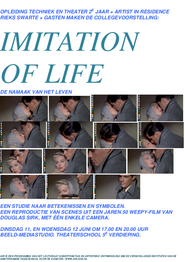