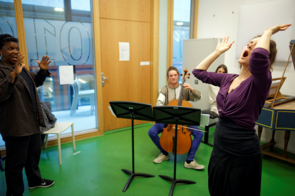 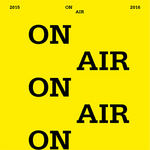 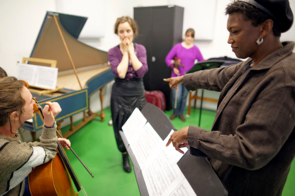 Apart from many radio and tv productions, Claron McFadden also recorded multiple CDs for big labels such as EMI, being nominated for a Grammy for her recording of Birtwistle's "The Woman and the Hare" with the Nash Ensemble. In 2006 she received the Amsterdamprijs voor de Kunst. Because of her versatility, she has found herself often asked to perform with jazz musicians such as Eric Vloeimans, Henk Meutgeert and the Jazz Orchestra of the Concertgebouw, Chris Hinze and Aka Moon. The music/theater piece "Lilith", created and performed by Claron McFadden had its world-premiere in the 2012 Holland Festival.

Artist in Residence (AIR) is a programme of the Amsterdam University of the Arts in conjunction with all of its departments. It stimulates innovation and facilitates encounters with contemporary art practice. And provides host faculties with the opportunity to benefit from the experience of respected artists, breathing new life into the educational and artistic structures of the Academy. Results of the AIR programme are published internal and external in the journal ON AIR. www.air.ahk.nl