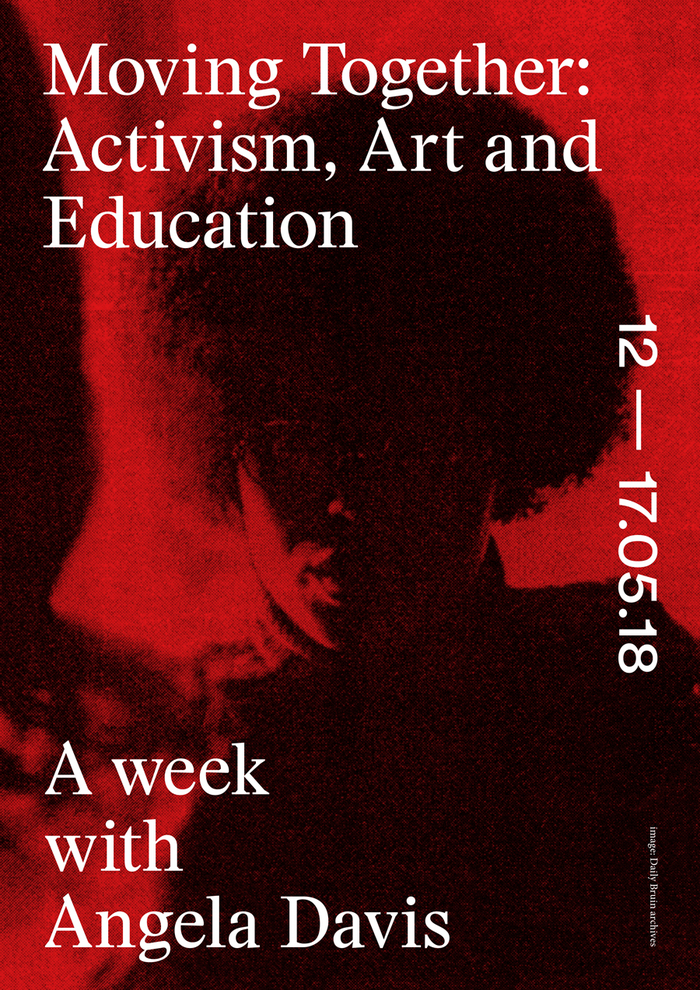 Moving Together: Activism, Art and Education – A Week with Angela Davis is a weeklong program taking place from 12-17 May at various arts, cultural, educational and heritage institutions, and community centers in Amsterdam. Together with esteemed guest Professor Angela Y. Davis, as well as artists, scholars, activists and audience members, we will look into questions of citizenship, communal knowledge sharing, intergenerational activism, and relevant artistic practices.

More information about the program

Artists, educators and activists have often been at the forefront of challenging social and cultural hierarchies within society. Events of the past decade have highlighted a noticeable increase in authoritarianism, racism, sexism, environmental disasters and economic hardship at local and global levels. This turbulent climate has prompted significant responses in the form of social movements calling for more inclusion, decolonization, and liberation within cultural and educational institutions.

In what ways are artists, educators and activists re-energizing cultural and knowledge production in the Netherlands? In what ways can institutions help mobilize these efforts towards creating a more just society for all?

Armed with thoughts, books, poetry and dance Moving Together: Activism, Art and Education aims to connect social, cultural, and educational institutions and initiatives in order to address themes of social justice, equality, artistic production and education, and share the emancipatory practices that emerge within these fields with a larger public.

This weeklong series celebrates the role and importance of black scholarship, cultural production, and activism within our contemporary polarized society. Central to the program is the work of Professor Angela Davis, whose life’s work exemplifies the value of interdisciplinary and intersectional practices of liberation.

Angela Davis’s work spans many decades. She is deeply involved in movements for social justice around the world through her activism and scholarship. Her work as an educator – both at the university and in the larger public sphere – has always emphasized the importance of building communities of struggle for economic, racial, and gender and sexual justice. Angela Davis is joined by her long-term collaborator Professor Gina Dent, whose work on prison abolition, feminism, social justice, and black literature and art contributes to the ongoing struggle for global social justice.

Program highlights
On Sunday 13 May the program opens with PUBLIC DIALOGUE: Intergenerational Coalitions, a public event at Tropenmuseum with contributions by Angela Davis, Gina Dent and artists, organizers, and educators such as Olave Basabose, Nawal Mustafa, Flavia Dzodan, and Joy Mariama Smith. (Tropenmuseum)

Wednesday May 16, the Black Archives hosts a lecture by Gina Dent on black artistic and literary responses to the social constructions of blackness. (Black Archives)

On Thursday 17 May, the weeklong program concludes with a keynote lecture by Angela Davis on art, activism, and education in a transnational context. The lecture is followed by a conversation between Angela Davis and Professor Gloria Wekker. (VU Amsterdam)

In addition to these public events, the program features a series of workshops, discussions, meetings, and film screenings at various locations throughout Amsterdam. Click here for the entire program.

Moving Together: Activism, Art and Education – A Week with Angela Davis is initiated by SNDO - School for New Dance Development and produced by the Academy of Theatre and Dance as part of AIR - Artist in Residence program of the Amsterdam University of the Arts and the Research Center for Material Culture (Nationaal Museum voor Wereldculturen).

The project is generously supported by Democracy and Media Foundation and Mama Cash with contributions of the Netherlands Institute for Cultural Analysis, Amsterdam Centre for Globalisation Studies, the ASCA Research Group Transformations of Civil Disobedience: Democratization, Globalization, Digitalization, VU University Amsterdam, Organisation of the Research Institute for Culture, History and Heritage, CLUE+, BAK Utrecht, Framer Framed, and the Black Archives.