Drake Music is specialized in working with musicians with a mental or physical disability. Within the music education this so called inclusion is a very actual development. Two specialized trainers / musicians of Drake Music, Ben Lunn and Tim Yates, worked three days with fourth year students of the Bachelor of Education in Music. Together they researched how technologies as the use of Ipads and (music)software can influence the inclusion of mental and or physical disabled people in the professional world of music. Lees meer

A pilot project for inclusive music education at the music teacher training college of the Conservatory of Amsterdam, The Netherlands.

As inclusive music education is part of the agendas of the Research Group Arts Education and the Conservatory of Amsterdam (both part of the Amsterdam University of the Arts), they initiated the four day pilot project ‘My Music Ability’ to address inclusie music edcuation. The goal of the project was for students to become inspired and more equipped to work with inclusive ensembles and inclusive music classrooms. The project was a mandatory part of the curriculum of students in the fourth and last year of their Bachelor in Music Education. Because of its innovative and unique character, the project and a film about the project could be funded by the Artist in Residence programme of the Amsterdam University of the Arts and by external funding of the Wim de Monchy Foundation.

What happened during the pilot project?
Tim Yates and Ben Lunn of Drake Music led different training sessions in which students explored theoretical and philosophical approaches to accessible music-making through discussion, video and practical work. During those sessions the students were also confronted with the question what accessibility and inclusion really mean in music education? Furthermore, the students learned about and developed accessible music technology themselves which had the potential to enable disabled people to participate in making music. During the third day of the pilot, an inclusive music ensemble was formed: the students and the musicians of Drake Music and My Breath My Music collaborated to create a music improvisation which was based around the instruments the students had been working with and had developed during the pilot.

The fourth day of the pilot coincided with the one-day conference My Music Ability. At the heart of this one-day conference the project’s inclusive ensemble performed their music improvisation. By performing in front of an audience, the idea of an inclusive music ensemble suddenly came alive and a real possibility. Moreover, both the vibrant performance as well as the film showed that the students had experienced the pilot project as highly positive and framed inclusiveness as a tangible practice.

The Amsterdam University of the Arts invites the Artist in Residence (AIR) to inspire students and teachers by confronting them with topical developments and issues from arts practrice. These tailor-made AIR programmes focus on innovation and connection in an international and multidisciplinary context. 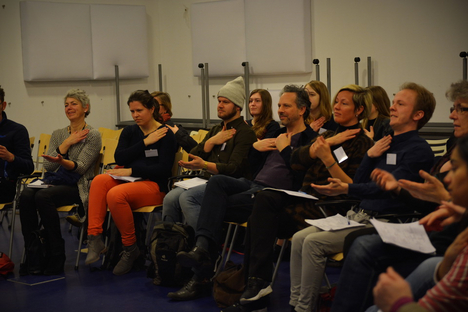 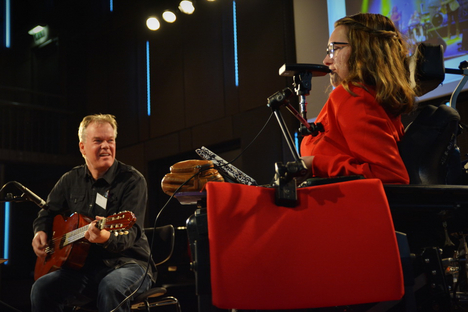 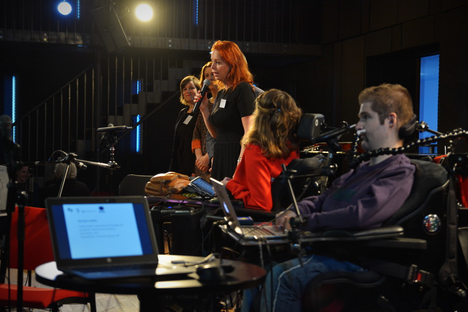