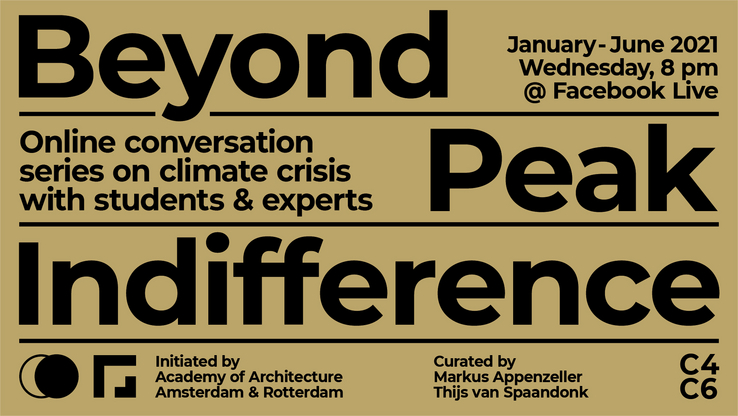 On October 16th 2019, The Guardian published a glossary of the change’s they made in their vocabulary when writing about the environment. Most prominent is that the use of ‘climate emergency’ or ‘climate crisis’ instead of ‘climate change’, since the latter no longer accurately reflects the seriousness of the overall situation.

The climate crisis has manifested itself recently through devastating and record-breaking wildfires Australia, California and Siberia, water shortages in South Cape Town and, closer to home, severe draught during the last usually moderate summers in The Netherlands. The visibly increasing impact on our daily life has reached Peak Indifference, the point where the majority of society starts understanding the urgency of the matter. Indifference has become a position only fatalists or those with a conflicting agenda can take.

The conversation series 'Beyond Peak Indifference’, organised by the Amsterdam and Rotterdam Academies of Architecture, tries to explore the magnitude of the climate crisis and how to approach it. What can we expect from technological breakthroughs to replace fossil resources? How do we deal with climate inequality? What politics and policies are necessary? How is the climate crisis also very much about biodiversity loss? How do we reconfigure our economic principles? And since we are also (landscape) architects and urbanists, how do we position ourselves and our profession in this crisis? How do we overcome our own indifference and move towards action? What are the instruments that we have at our disposal?

In each of the fourteen sessions, invited speakers (to be announced) will participate in a conversation with students of the both Architecture Academies.

The conversation series is organised and will be moderated by Thijs van Spaandonk and Markus Appenzeller, Heads of Urbanism at the Academies of Architecture in both cities.

The conversations will take place on Wednesday evenings and will be live streamed via Facebook, starting from 27 January, 8pm. You will be able to participate in the discussion by means of the chat function.