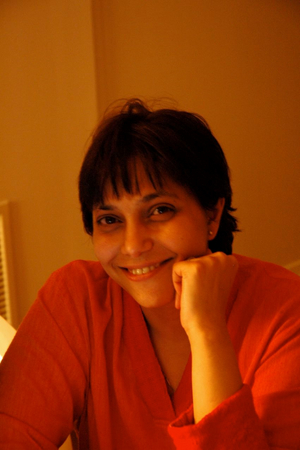 From November to December 2019, anthropologist and curator Vyjayanthi V. Rao is the Reinwardt Academy’s Artist in Residence (AIR). She studies interfaces between urban planning, design, art, violence and structures in contemporary cities. Rao's AIR programme consists of three projects that focus on the question: what can ethnographic research and curatorial practice learn from each other?

Vyjayanthi Rao divides her residency at the Reinwardt Academy into three parts. The first is an ethnographic research programme. Together with the Indian artist Sudarshan Shetty, she investigates the interaction between major social issues and individual artistic projects. The focus is on two neighbourhoods in development: the Marineterrein and Amsterdam-Zuidoost. In these neighbourhoods they visit a large number of artists and institutions, such as the CBK Zuidoost and Imagine IC.

The second part consists of three masterclasses on the relationship between art, design and urbanism. She looks at ways in which changes take place in the city and how city dwellers navigate through them. She specifically investigates how artists get inspiration from urban environments and how artistic interventions can transform places.

The third part of Rao’s stay is a collaboration with interested students and colleagues from the AHK. Together with them she designs and curates a project that brings together ethnography and issues about an urban future. Inspired by questions about socializing, inclusion and speculation in a changing urban context, we look at what can be learned from a cross-cultural dialogue.

Below are the events that you can attend. For the masterclasses registration is required. To register please send an email to marit.vandijk@ahk.nl, to which you can also send all your questions.

Rao wrote numerous articles on these topics and collaborated on the books Speculation Now: Essays and Artworks (Duke University Press, 2015) and Occupy All Streets: Olympic Urbanism and Contested Futures in Rio de Janeiro (UR Books, 2016).

Rao is also a member of the editorial board and managing editor of the interdisciplinary journal Public Culture (Duke University Press). She is also co-director of Terreform Center for Advanced Urban Research, a non-profit research practice in New York City. She teaches Urban Studies at the Spitzer School of Architecture, New York City College, and is a member of the artist collective Samooha, where architecture, activism and anthropology come together.