Training the Future: Context, Difference and Awareness in Dance Education 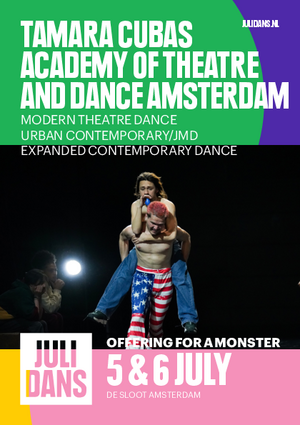 The last session of Artist in residence Training the Future: Context, Difference and Awareness in Dance Education hosts Uruguayan artist Tamara Cubas who will work with the students of ECD, MTD and JMD on her latest project Offering for a monster. Co-curated with the artistic director of Julidans festival Anita van Dolen, this special edition of AIR will culminate in a performance in Amsterdam’s De Slot on July 5&6 as part of the Julidans program.

After tries and tribulations of the last two years’ Corona pandemic, that forced us to cancel the gatherings planned in that period, we are pleased to conclude our journey with Cubas. Critical of Western obsession to formulate togetherness through consensus, horizontality, search of similarities and commonness, Cubas develops methodologies of collaboration driven by radical heterogeneity.

Collective for Cubas doesn’t have a purpose to « solve » diversity and difference. Rather it is a place of risky, frictious encounters through which we affect and are being affected, in which love, hurt and all kinds of shifts and moves occur. Such encounters according to Cubas give birth to monsters - that which we could not yet imagine.

Through her numerous workshops, stage and public space performances, Cubas engages with migrant bodies, precarious bodies, borderline bodies or ad-hoc communities, developing her own take on canibal aesthetics inspired amongst others by post-dictatorship Brazilian art, constantly investigating aesthetic and political process’ in her own country in search of decolonial forces.

In Offering for a monster, Cubas brings focus on youth, understood itself as embodied monstrous force. In her words « The youth is a clash between the past, the present and the future. The result of this impact is a force, a monstrous force. The monster, which has no predetermined shape, as it is yet to come to existence is open to the abyss of new formulation that will emerge by necessity. (...) An open, vulnerable, fragile body. (...) Opening oneself to the world in all its complexity »

Cubas’ methodology and thinking of encounters, collaboration and difference is a fitting conclusion of this Artist in residence. For one because Offering for a monster meets students precisely where they are - on the crossroads - and rather than showing the way, it gathers all the potency and power of that which can emerge from this place in between. What new, yet unimagined (artistic, social) formulations will this generation bring to existence?

Secondly, because Cubas’ radical methodologies which seek to preserve heterogeneity while creating conditions to sustain common goals and common actions resonate with our educational project which, as said in our starting statement, « gathers young dancers with different backgrounds, on the level of their social and cultural milieu, but also their dance styles, vocabularies, technical training, modes of existence, and aesthetic horizons. » Rather than fusing these differences into a consensual aesthetic outcome we will continue researching methods and structures that keep the opening for unexpected intersections to happen yet again and again.