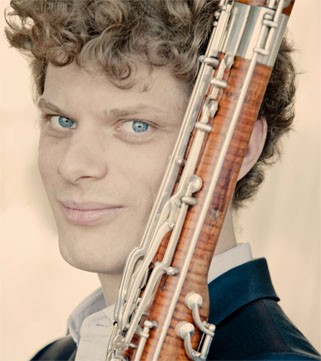 As of September 2013, the internationally renowned bassoonist Bram van Sambeek will join the bassoon section as principal subject teacher.

Bram van Sambeek (1980) was the first bassoonist ever to receive the highest Dutch Cultural Award in 30 years: The Dutch Music Prize. In 2011 he won a Borletti Buitoni Trust Award, and recently he has been admitted to The Chamber Music Society Two programme of New York’s Lincoln Center.
From 2002 until 2011 Bram was Principal Bassoonist of the Rotterdam Philharmonic Orchestra. He plays regularly as a Guest Principal with, among others, the London Symphony Orchestra and the Mahler Chamber Orchestra. Focussing mainly on chamber music, Bram is a member of the Orlando Quintet, and made his Amsterdam Concertgebouw debut in 2003. Bram van Sambeek performs regularly as a soloist with orchestras such as the Rotterdam Philharmonic Orchestra, Sinfonia Rotterdam and Georgian Sinfonietta.
In an interview about Bram Valery Gergiev remarked: ‘…all in all a combination of being artistically involved, motivated and being gifted, being a very nice person, and also being a little bit unusual!’.
In March 2012 Brilliant Classics released his second cd ‘Bassoon-Kaleidoscope’, with a wide range of chamber music, including a rocksong, and in the coming seasons he will perform  the new bassoon concertos by Sebastian Fagerlund and Kalevi Aho and record them for the BIS label.

More about Bram van Sambeek may be found on his website:
www.bramvansambeek.com