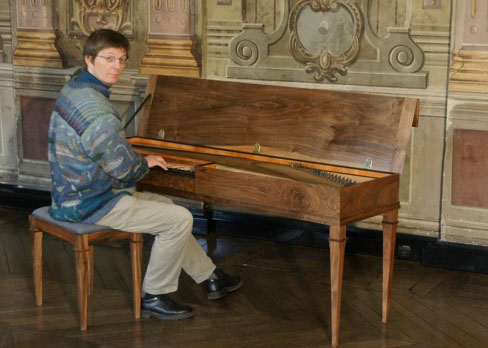 As of 1 October, organist, harpsichordist and fortepianist Miklós Spanyi has joined the Early Music Department as teacher of early music improvisation on keyboards. Miklós is renowned as soloist and continuo player and is also widely appreciated as improviser and composer.

Miklós Spányi (Budapest, Hungary) has given concerts in most European countries as a soloist on five historical keyboard instruments (organ, harpsichord, fortepiano, clavichord, tangent piano) as well as playing continuo with various chamber  music groups and orchestras. He has been artistic director of the Hungarian baroque orchestra Concerto Armonico since its foundation in 1983. Between 2006-9 Miklós Spányi was artistic director of the Finnish early music group Ensemble OpusX. Currently he is also member and artistic director of Ensemble Mimage.
For some years Miklós Spányi's work as a performer and researcher has been focused on the oeuvre of Carl Philipp Emanuel Bach. Today he is one of the world’s most acknowledged C.P.E. Bach scholars and performers. He has also worked intensively to revive C.P.E. Bach's favourite keyboard instrument, the clavichord. Miklós Spányi was teaching at the Oulu Conservatoire and the Sibelius Academy in Finland between 1990-2012. He has given  masterclasses in the Netherlands, Belgium,  Germany, Switzerland, France, Portugal, Hungary and Finland. Miklós Spányi is also appreciated as improviser and composer.