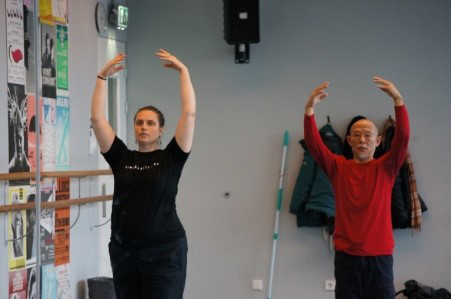 Amy Raymond, former dancer with Dutch National Ballet and Ballett Frankfurt, has been rehearsing ballets by William Forsythe all over the world for more than ten years. Recently, she has been working with budo master Akira Hino on integrating his martial arts method into classical ballet. From 14 to 19 March, Raymond will be giving a workshop that focuses on creating more awareness of the body.

Amy Raymond is no stranger to the National Ballet Academy, as she has worked several times in recent years on teaching William Forsythe’s technique and ballets to the students. It was also through Forsythe that she came into contact, around nine years ago, with the Japanese budo master Akira Hino. ‘Hino has worked with dancers of The Forsythe Company (successor to Ballett Frankfurt – ed.) on achieving a more efficient and natural use of the body’.

Last year, Raymond and Hino worked together on investigating how Hino’s martial arts method can be applied to classical ballet. Raymond says, ‘Many people still think of martial arts as being a competitive sport, but that’s really not the case here. Hino has been developing his method for 35 years now. He’s 68 and it’s incredible how flowing his movements are and how powerful he is. Youngsters are no match for him’.

‘In the workshops, I’ll be concentrating on creating more awareness of the body. We’ll be working on stretching, although not legs, back and turn-out, like in ballet. It’s all about stretching the really deep muscles that are attached to your spine. The students will feel parts of their body they’ve never felt before’.
‘I also want to expand their focus. By focusing on certain parts of the body as a classical dancer, you can create more beautiful lines and also feel those ‘inner lines’. And we’ll be working on developing an ‘objective eye’. As a dancer – and even just as a person – you often have a completely different idea of what you’re doing to what it actually looks like. By learning to look objectively at themselves, through using photos or videos, for example, students gain awareness and you stimulate their own responsibility for making adjustments where necessary’.

‘And if we still have time’, says Raymond laughing, ‘I’d like to also work on the contact between dancers. Dancing together is more than just looking at one another to check that you’re in line. You have to be genuinely sensitive to the other person, and really feel the other person and the space that separates you’.