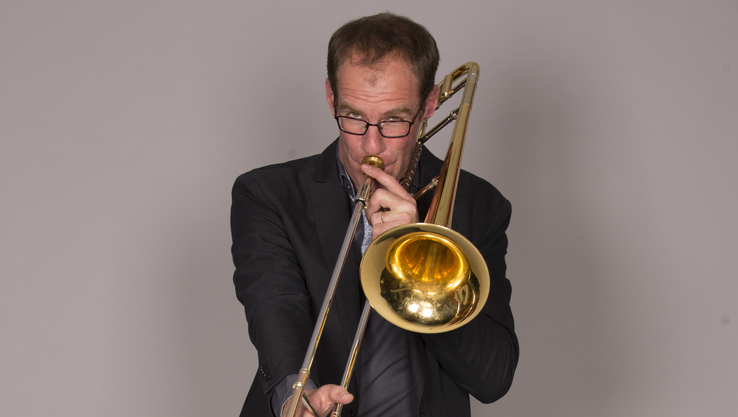 As of 1 September 2019, trombonist Ilja Reingoud will be appointed conductor of the CvA Monday Big Band. He will succeed Erik van Lier, who has successfully led the Monday Big Band for almost four decades.
Every year the CvA Monday Big Band gives several concerts focusing on the famous jazz repertoire as well as new works for big band, written by CvA students and educators, often featuring internationally renowned soloists.
‘I look forward to working with the big band and to realize all the wonderful plans for the future,’ says Ilja Reijngoud.
Edo Righini, Associate Director and Head of Jazz and Pop Music, is very happy to welcome Ilja as the conductor of the Monday Big Band. ‘He is not only a virtuoso musician with a distinguished voice but also a passionate teacher and an accomplished composer, arranger and musical director.’

Ilja Reijngoud (Leiden, 1972) has been a teacher of trombone as a principal subject at the Conservatorium van Amsterdam for many years. Winner of prestigious awards, including the Thelonious Monk BMI Composition Award, an Edison, the Deloitte Stimulus Award, the Singer Laren Jazz Award and the VPRO/Middelsee Jazz Award, he leads his own bands, recording award-winning albums such as The Shakespeare Album, Around The World and the Jay & Kai tribute band. Additionally he is a member of the Jazz Orchestra of the Concertgebouw, The Houdini’s, The Cubop City Big Band, Lucas van Merwijk Music Machine, The Jasper van ‘t Hof Quartet, Gino Vannelli’s Dutch Beat Band, The Dutch Jazz Orchestra. He also featured as a soloist with the Metropole Orchestra.