Interview with Laura Cull Ó Maoilearca: ‘Knowing how to not-know’ 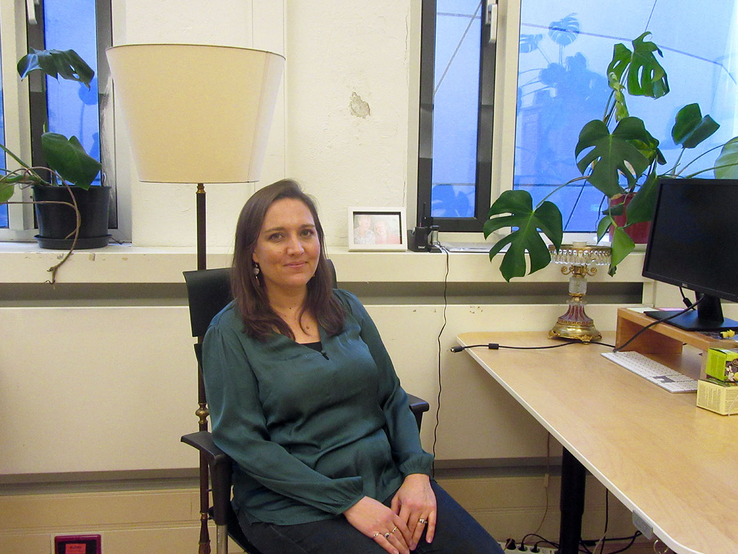 The venue for my meeting with Laura Cull Ó Maoilearca is her new study, a bright room filled with plants. It is six weeks since she took up her post as Head of DAS Graduate School. And it has been six weeks of discovery, getting to know people, finding out what’s going on in the school and the arts, in Amsterdam, in the Netherlands. For her children, it’s meant a new city, a new school, a new country.

Born in Scotland, Laura attended art college in London before turning to philosophy. In 2012 she started working at the Theatre & Dance Department at the University of Surrey, and in 2014 was appointed to head the department, where she was recently awarded a major grant for her research into performance philosophy. Laura wasn’t looking for a new job, it found her, when the AHK invited her to apply for the position. Why did she make this move? And in which direction does she want to take the school?

Laura Cull Ó Maoilearca: ‘Last week I was writing an essay partly influenced by a text by the American poet Fanny Howe’ titled Bewilderment, says Laura, ‘Bewilderment is a state of not knowing, of a complete loss of grip, of feeling like your compass is swirling. For Fanny Howe this state gives access to poetry – and, in a broader sense, life itself.

‘My father died last February. He was seriously ill at the time I was applying for the position, and he was aware that I got it. There was this strange concurrence of feelings: the unbearable sorrow about his death and the great joy about this new job. I tried to shut out the grief at first and go on living my life as before. But then I was out walking in the forest and I realised that letting in the grief, the all-consuming waves of sorrow that overturn everything, can ultimately lead to transformation, precisely because of the not-knowing, the chaos, the loss of control.’

‘Grief changes your ideas about plans and plotting out a path – it turns presenting a vision of the future into a curious undertaking. And the pandemic makes it all even stranger. It’s made the very future of the arts radically uncertain. I’ve only been here since 1 September. Everything’s new – the country, the school, the arts scene. I don’t think I should attempt to impose my ideas on a community I barely know yet. And, in any case, formulating a vision should by definition be a joint enterprise – certainly if you’re going to be sharing responsibility for the future you’re building.

You’re bringing plenty of experience to this role, of course. Could you provide some background about performance philosophy and the research you’re conducting at the moment? I watched some footage from your projects online in which a singer and a double bassist try to connect with a pig.

‘Performance philosophy has existed as a named field since around 2012 - though of course the ideas it relates to are much older. It’s based on the double premise that – first, the performing arts produce knowledge through their own, physical means, and can serve as a resource for philosophy. And second, that philosophy and thinking is something we perform. For instance, we could think about how in earlier times philosophy was a far more embodied practice, with meditation, yoga, ethical interaction – and aesthetics – all having important parts to play in how new ideas were produced and debated.

‘The title of the research project I’m leading at the moment is Performance Philosophy & Animals: Towards a Radical Equality. There’s an immense power dynamic involved in how we think about animals. The question is whether performance can offer a means to gain more ethical knowledge in our dealings with animals – or, better, nonhuman animals. The Sheep Pig Goat project by the arts company Fevered Sleep, which you saw a clip from, is part of this research. We worked together at the University of Surrey Vet School earlier this year. At the centre of their building is a large atrium filled with anatomical models, so the first way students get to know about the animal is through their constituent parts. We wanted to explore if it’s possible to use performance to place different types of knowledge in conversation with each other. What happens when you put musicians or dancers in the same space as a pig, or a sheep, or a goat? How do you encounter or meet an animal? What does “meeting” even mean here? More than just finding answers, we were aware of the huge preconceptions involved in our dealings with animals; of the knowledge or ways of thinking that can actually prevent us from knowing how to connect with the other.

‘Another part of the project I‘m working on is a podcast series led by artist and writer Rajni Shah in which we’re exploring care, dehumanism, decolonisation and healing practices. Racism is not the same as speciesism but they both involve this violence around the question of which lives are valued, and by whom. I’ve noticed some difference in how racism is being talked about in the UK and the Netherlands. In the UK conversation about racism, which has been going on for a long time, the idea of “diversity” comes in for powerful criticism. Diversity is associated with a kind of “box-ticking” mindset that often only leads to superficial change, with organisational structures remaining unchanged. The emphasis in the UK right now is more on the decolonisation of organisations, of the curriculum, and of ourselves as individuals.

‘One of the most radical changes is almost invisible. It plays out at a personal level: What are my blind spots as a white, cis, able-bodied, middle class woman who was raised and is active in a Eurocentric world? What books do I read? What am I listening to? Who am I working with? Who are my friends? Do we dare to ask ourselves the most uncomfortable of questions? How do I uphold white supremacy in my everyday life, and in what ways do I unconsciously perpetuate racism? It was through the project with Rajni that I began to appreciate that the most radical gesture could be to take a step back, to make space for others and to do more listening and less talking. In this podcast series it was important that the conversations took place without me, a white woman, being present. That was an uncomfortable thing to learn. But a really important one. And it’s certainly something I try to bring to my new work here.

‘The ATD has set a tremendous amount in motion in recent years, of course, but it seems to me there are still steps waiting to be taken to make the school more inclusive. The pandemic putting everything on hold offers us an excellent window of opportunity for taking an even closer look at how we are organised, at a structural level. I’m not an expert! I make mistakes all the time. But I’m willing to learn, and I feel a great sense of responsibility.’

Does the word ‘bewilderment’ apply here too?
‘Yes. It’s not my intention to stay in that state, but being able to visit it, even temporarily, is incredibly important if you want to make real change possible. What’s interesting is that it’s in the arts that you’ll find expertise about how to engage with that state of not-knowing – that can be terrifying but also really creative. Artists know how to improvise, how to be uncertain, how to play and experiment. They develop skills and techniques to stay afloat in the unknown. There aren’t many other fields where you learn how to do that. Artists have vast amounts of knowledge to offer: at the moment of greatest uncertainty, they know how to not-know; how to be receptive.’

Share
Amsterdam University of the Arts>News and events>News>Interview with Laura Cull Ó Maoilearca: ‘Knowing how to not-know’