'Production manager must be the craziest job ever'

‘It’s been a bizarre six months,’ says Job Rietvelt, who’s studying Production and Stage Management (OPP). Artist in Residence Ugo Dehaes led Job and his classmates working on Protest with students from Modern Theatre Dance (MTD). ‘So many things have been turned upside down. I’m still putting all the pieces back together. By letting go of “the production” and taking on the role of costume and set designer I’ve experienced for myself the process an artist goes through. It was only by taking a distance that I saw what a production manager needs to do.’

While Ugo Dehaes and the MTD students developed the protest-themed dance, the OPP students got to work on the costumes, sets, video and sound. There was a particular focus on the quality of the process, rather than only on the final product. It was all about changing concepts, improving and going deeper – about extending your boundaries. If an OPP student had a good idea they wanted to use straight away the teacher would start looking into it first.  ‘Whenever one of us had a discussion with Ugo or the workshop leader he or she would be upset for the rest of the day,’ says Job.

‘I now realise just how delicate, how fragile, the creative process is. It doesn’t matter whether you’re a director, actor or lighting designer, you’re all going through your own process. And that process is so incredibly vulnerable. Everyone’s striving for the best, and that’s a fantastic thing to see. It’s also one of the greatest challenges of working in theatre, because everyone’s so driven that it makes communication within the collaboration really complex.’ When the time came for Job to relinquish control over his video and costumes as they were brought into the larger project, he realised for himself just how difficult that can be. ‘Suddenly I didn’t have final say about how it would be presented and combined with the choreography. That hurt.’

‘Being a production manager must be the craziest job ever. You’re involved with all these different people in different disciplines, and you need to know something about all of them. We’ve all had moments when we wished we were an artist excelling in just one thing, and could let someone else sort out the mess,’ reveals Job. This role reversal impressed on the students the sorts of demands they were placing on the people producing the project: everything from lack of variety in the meals to lack of budget for certain aspects of the production. As well as finding out what creative professionals need, they discovered that the most important things in a production manager’s toolkit is a great idea from the director and the ability to go along with other people’s ideas.

Firm grounding in the world 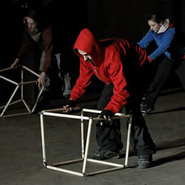 When Job started on the course he assumed he would spend his time doing lots of organising. The AIR project with Ugo Dehaes showed him that in fact communication is eighty per cent of the job: ‘There are all sorts of complex processes to untangle and you have to get the best quality out of people. And as well as providing support, you’ve got to have a firm grounding in the world. What the production manager does goes to the roots of the project. You start exerting an influence right from the first conversations with the director. It’s a reciprocal process. You’re the one who’s responsible for defining what’s achievable. You need to be able to say “no” when it’s necessary, and to offer alternatives, and to stimulate people. And to do that you need people skills and confidence.’

‘All of us working on the project wondered at one point or another what exactly our function was,’ says Job, ‘and we’re still asking ourselves the same question. But just saying “I organise” doesn’t do justice to all the job entails.’