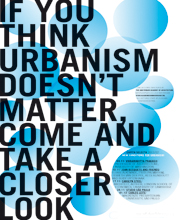 In November and December the Amsterdam Academy of Architecture organizes a new series Capita Selecta titled New Conditions for Urbanism. In this series architects and urban designers explore the possibilities of urban interventions in rapidly growing cities with high population densities in India, Brazil and some large European cities.

The Capita Selecta series ‘New Conditions for Urbanism’ will research the potential of urbanism in relatively new settings. This series presents lectures that attempt to rethink urbanism’s role in various fields undergoing explosive change: rapidly developing cities in India and Brazil, and new conditions in the European city in an era of financial and political crisis.

Joan Busquets will lecture and debate with guests about new opportunities for urbanism in the European city. This will set the tone for discussions on the role of urbanism in India and Brazil. Vikram?ditya Prak?sh will reflect on the city of Chandigarh and the potential of the mid-size Indian city, while Carlos Leite will set the agenda for São Paulo, a metropolis of twenty million inhabitants experiencing profound economic transformation. Studio São Paulo, an initiative launched by five Dutch urbanism offices together with offices and municipal departments in São Paulo, is the focal point for a discussion on old versus new, and what constitutes an effective or ineffective urban intervention. Carolyn Steel, author of the renowned book Hungry City: How Food Shapes our Lives, will examine thematic approaches to the city from another angle.

Date and time
The lectures are open to the public and take place at the Amsterdam Academy of Architecture, Waterlooplein 213, Amsterdam. All lectures start at 20.00 hrs. and admission is free.