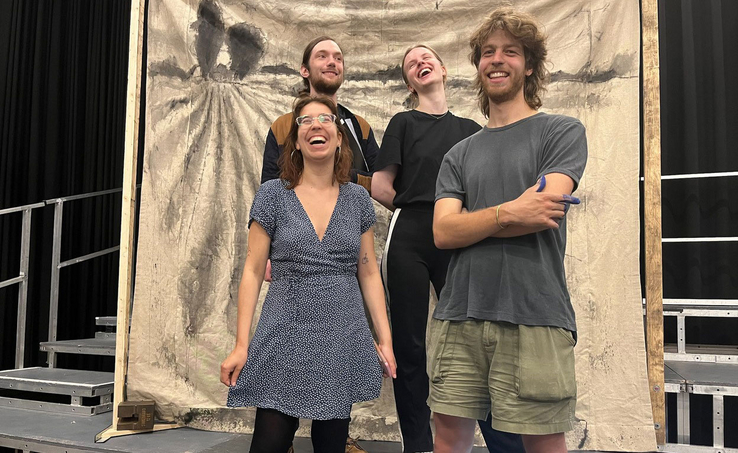 It will be like watching an exciting Netflix series. The six-hour show Parabool 0x5 by director Jan Wienowiecki (24) takes you on an exciting journey through Europe during the Second World War. All the stops will be pulled out. ‘You'll be amazed!’

Jan, what does the spectator experience in your graduation performance?
‘Spectacle. Only spectacle! Parabool 0x5 will be the biggest graduation performance ever. The audience will be taken on a six-hour journey through Europe during the Second World War by no fewer than fourteen actors. In four acts we use every theatrical means to tell a compelling and relevant story.'

What makes Parabool 0x5 topical? Is there a link with the war in Ukraine?
‘The theme of war is of course related to the current situation in Ukraine. For example, in solidarity with the Ukraine, the third act features a costume in blue and yellow. But our performance is also full of references to current affairs. From sexism, homophobia, racism, white supremacy to Covid and the technicians on strike at ITA. We think it is important to make statements.’

Six hours of theatre, that's quite a long time sitting?
‘No, it is not. You'll be amazed! It's like binge-watching a Netflix series: you watch all the episodes of one season in a row because you can't stop. We are inspired by historical thrillers such as Dan Brown's. The audience follows the story of British agents and scientists who must unravel a historical mystery surrounding the German V2 rockets. The solution to this riddle seems to be an American agent in London. Thus, a boundless conspiracy unfolds in which nothing is what it seems.'

Exciting... and how is this show different from binging a Netflix series?
‘You do not sit at home on your couch, but you’ll be completely immersed in the experience. The show takes place in front of, between and above the audience. And in the breaks you eat delicious vegetarian meals!’

Finally: what drives you to create the 'biggest graduation performance of all time'?
‘I want to give the audience all the spectacle they need. Spectacle appeals to me because it is not done enough at school. I want to give the audience the opportunity to escape reality. To be taken away from all circumstances to another world that has nothing to do with current affairs. Parabool 0x5 wants to be a catharsis for the spectator.’