Saturday 9 May 2022 - The fifth Unlearning Saturday was dedicated to Time. How to unlearn Time, or rather: how to understand that there are different conceptions of Time – or temporalities – and to understand that we can critically question or contextualise the dominant one which sees Time as chronology, as linear, as progressive…

Rachael Rakes
The day at the Film Academy was introduced by Rachael Rakes, the Artist in Residence responsible for the Time programme. She had invited three artists-researchers to help us rethink time: Susanna Bloem (philosopher and historian of science, and composer), Mijke van der Drift (philosopher, interested in non-normative ethics, and educator) and Oscar Santillan (visual artist and cybernetician from Ecuador, living in the Netherlands; www.antimundo.org).

After inviting one of last Saturday’s participants to present the gift made by them during Unlearning Rituals, Rachael gave us a list of different quotes which we were invited to read out loud. Later-on, Mijke did the same. Three of those quotes you’ll find on this page. 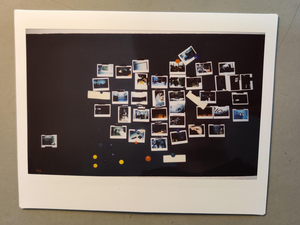 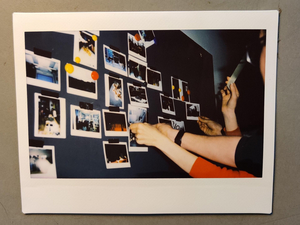 The introduction concluded with a meditation, after which we went to the Film Academy’s cinema to listen to, and actively participate in a lecture-experiment by Susanne, who’s researching the relation between mental health, musical composition, and the experience of time. Taking her cues from Dutch psychiatrists in the 1930’s, she researches how (listening to) music can help people suffering from depression by giving them a different experience of time and different conceptions of what the future holds.

Immediacy & duration
Similar to the previous Saturdays, lunch was conceived with the theme of the day in mind. Working with the notion of time meant, among others, working with ‘ immediacy’ – frying eggs on the spot – and ‘duration’ – using a cleaning hand gel, made from grapes, that had taken 5 months to prepare…

"The established time continuum has to be arrested, and that a new time has to begin"
Herbert Marcuse

Conception of time
After lunch, Mijke raised the question of ‘colonial time’, or the way in which Western thought (Descartes, Kant, Spinoza, Hegel…) laid the theoretical foundation for the colonialist conception of time in which non-Western cultures and epistemological traditions are considered ‘less developed’, ‘lagging behind’, ‘rooted in the past rather than the present’. Mijke then physicalized that knowledge with a movement exercise that rendered the idea of ‘leaving the future behind’  and ‘looking forward to the past’ in a cooperative manner.

Record a 10-minute guided tour
Next Oscar took the floor to present his artistic practice, which revolves very much around non-Western or indigenous ways of knowing, and is always undertaken in very close cooperation with scientists and experts. Most recently, this interdisciplinary method led to the work Forcast, described as a ‘device containing a colonial garden fed by Apocalyptic movies’.

We concluded Oscar’s part of the day with an exercise in which we’d all record a 10-minute guided tour on our mobile phones of the space inside or outside of the Film Academy and then swap our recording with someone else’s and listen to their guided tour.

Document the day - aware of time
All through the day 5 Polaroid cameras were used and then passed on by the participants to document the day. The sound of the cameras and then waiting for minutes for the images to appear was yet another way for us to become aware of time. At the end of the day, after we’d received the second part of the gift of Unlearning Rituals, we were then invited to make a collective montage of all these Polaroid images to summarise what the day had brought us – as a gift to the next Saturday, Unlearning Space. 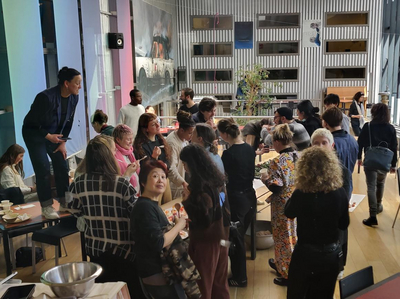 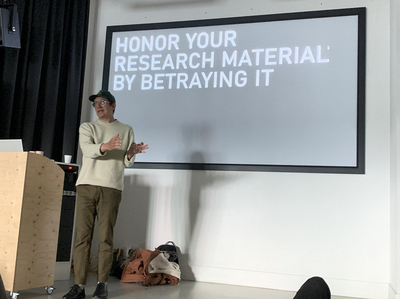 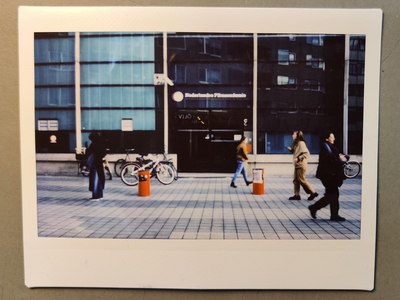 "Nothing can shake our conviction that the past is at our back, that it lies behind us"
Stefan M. Maul

“Walter Benjamin quotes reports that during the Paris Commune, in all corners of the city of Paris there were people shooting at the clocks on the towers of the churches, palaces and so on, thereby consciously or half-consciously expressing the need that somehow time has a to be arrested; that at least the prevailing, the established time continuum has to be arrested, and that a new time has to begin – a very strong emphasis on the qualititative difference and on the totality of the rupture between the new society and the old." - Herbert Marcus

“Time is a dimension through which the fundamental tenets of a culture are learnt, disseminated and held to be true. As such it provided one of the key standards of knowledge and models of behavior against which Europeans sought to reform their Others in the colonies – operating simultaneously as a category for establishing the cultural and racial inferiority of local populations and as a channel for reforming the latter into so-called modern, civilized and Christian subjects."  - Giordano Nanni

“It is […] clear that for a Babylonian the past lay before [them] – it was something [they] faced; whereas that which was coming, the future, was something [they] regarded as behind [them], as at [their] “back”. In the mental world of […] modern society, the exact opposite is the case. When we look “into the future”, we firmly believe that our gaze is fixed straight. Ahead. Nothing can shake our conviction that the past is at our back, that it lies behind us. While we advance along a timeline that has us “facing the future”, the Mesopotamians advanced along the same timeline but with their eyes fixed on the past. They moved, as it were, back-to-front – backing into the future.” Stefan M. Maul – Walking Backwards into the Future

Other impressions of School of Unlearning 2022 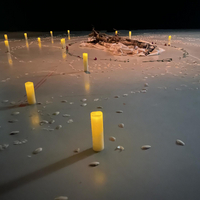 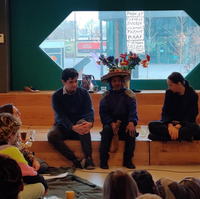 Impression of Unlearning the Human 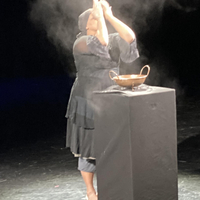 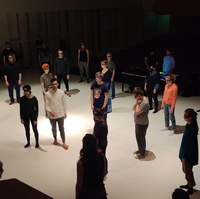 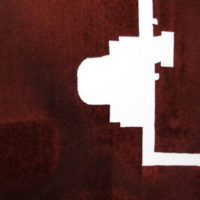